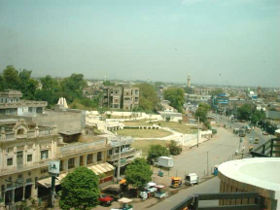 The Jhelum or Jehalam is situated in upper Punjab province of Pakistan. Its population is around 1 million, of which 31.48% are in the main Jhelum city and rest in the small villages and touwns of Jhelum District. Jhelum City The Jhelum City situated on the right bank of the river Jhelum, here crossed by a bridge

The district of Jhelum stretches from the river Jhelum almost to the Indus. Salt is quarried at the Mayo mine in the Salt Range. There are two coal-mines, the only ones worked in the province, from which the North-Western railway obtains part of its supply of coal. The chief centre of the salt trade is Pind Dadan Khan. The district is crossed by the main line of the North-Western railway, and also traversed along the south by a branch line.

The river Jhelum is navigable throughout the district, which forms the south-eastern portion of a rugged Himalayan spur, extending between the Indus and Jhelum to the borders of the Sind Sagar Doab. Its scenery is very picturesque, although not of so wild a character as the mountain region of Rawalpindi to the north, and is lighted up in places by smiling patches of cultivated valley. The backbone of the district is formed by the Salt Range, a treble line of parallel hills running in three long forks from east to west throughout its whole breadth.

The range rises in bold precipices, broken by gorges, clothed with brushwood and traversed by streams which are at first pure, but soon become impregnated with the saline matter over which they pass. Between the line of hills lies a picturesque table-land, in which the beautiful little lake of Kallar Kahar nestles amongst the minor ridges. North of the Salt Range, the country extends upwards in an elevated plateau, diversified by countless ravines and fissures, until it loses itself in tangled masses of Rawalpindi mountains. In this rugged tract cultivation is rare and difficult, the soil being choked with saline matter. At the foot of the Salt Range, however, a small strip of level soil lies along the banks of the Jhelum, and is thickly dotted with prosperous villages.

The drainage of the district is determined by a low central watershed running north and south at right angles to the Salt Range. The waters of the western portion find their way into the Sohan, and finally into the Indus; those of the opposite slope collect themselves into small torrents, and empty themselves into the Jhelum.

The history of Jhelum dates back to the semi-mythical period of the Mahabaharata. Hindu tradition represents the Salt Range as the refuge of the five Pandava brothers during the period of their exile, and every salient point in its scenery is connected with some legend. Modern research has fixed the site of the conflict between Alexander and Porus as within Jhelum district. After this event, there were several dynasties and rulers ruled and several phases of religions passed thru here. We have little information with regard to the condition of the Jhelum district specifically until the Muslim conquest brought back literature and history to Upper India. The Janjuas and Jats, who now hold the Salt Range and its northern plateau respectively, appear to have been the earliest inhabitants.