Chanhoon Jo Daro is an archeological site dating back to 1700B (Indus Civilization). It is located near village Jamal Kiriyo Taluka Sakrand district Benazirabad on the Hazari Canal south east point where Dadu canal crosses the Benazirabad to Sakrand road.

There are 3 mounds of this archeological site rising to 12 to 20 feet above the ground. The excavations have let to the discovery of remains of Mohejn Jo Daro period civilisation. There was an eleborate system of drainage, painted pottery, bead making apparatus, seals, copper and bronze models and toys similar to Mohen Jo Daro.

It appears that this place was cnter of manufacturing of beads and toys.

The site is located 130 kilometers (81 mi) south of Mohenjo-daro, in Sindh, Pakistan. The settlement was inhabited between 4000 and 1700 BCE, and is considered to have been a centre for manufacturing carnelian beads. This site is a group of three low mounds that excavations has shown were parts of a single settlement, approximately 5 hectares in size.

Chanhudaro was first excavated by N. G. Majumdar in March, 1930, and again during winter field session of 1935-36 by the American School of Indic and Iranian Studies and the Museum of Fine Arts, Boston team led by Ernest John Henry Mackay. Prof. W. Norman Brown of the University of Pennsylvania was instrumental in enabling the funds for this project. After the independence of Pakistan, Mohammed Rafique Mughal also did exploratory work in the area.

In respect of Indus Script, ||/ sign is only found on inscriptions found at Chanhudaro. It occurred on eleven objects, (around one sixth of all inscribed objectes recovered from Chanhudaro) leading to suggestion by Asko Parapola that it may represent town's name.

Cotton cloth traces preserved on silver or bronze objects were known from Chanhudaro, Harappa and Rakhigarhi.

Objects of Iron were reported from Chanhudaro, Ahar, Rajasthan (India) and Mundigak and this gains importance as it has been claimed that Iron was produced in 3rd Millennium in South Asia. 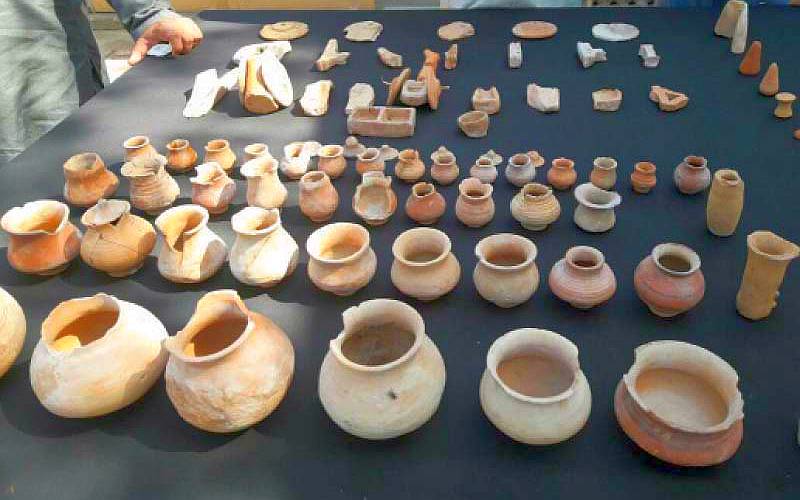