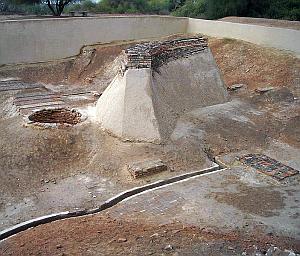 Harappa is one of the two main cities of Indus civilization. Harrappa was discovered first hence the Indus civilization was called Harrappan Culture. Harrappa is located in Punjab province of Pakistan near Sahiwal city and about 4 - 5 hours journey from Lahore.

Harrappa is situated at about 20 km (12 mi) west of Sahiwal. The site takes its name from a modern village located near the old course of the Ravi River, some 5 km (3 mi) southeast of the site.

The site contains the ruins of a Bronze Age fortified city, which was part of the Cemetery H culture and the Indus Valley Civilization, centered in Sindh and the Punjab. The city is believed to have had as many as 23,500 people living which can be considered large population for that time. (2500BC)

For tours of Harrappa & Moen Jo Daro Please contact us

In 2005 a controversial amusement park scheme at the site was abandoned when builders unearthed many archaeological artifacts during the early stages of construction work. A plea from the prominent Pakistani archaeologist Ahmed Hasan Dani to the Ministry of Culture resulted in a restoration of the site 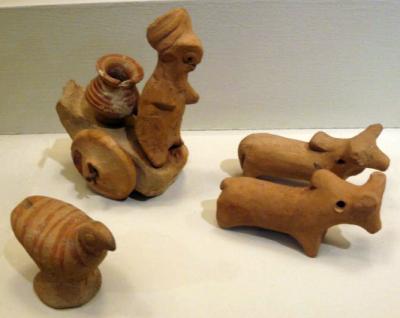 The Indus Valley Civilization or Harappan Culture has its earliest roots in cultures such as that of Mehrgarh, approximately 7000 BC & Kot DG & Aamri (3300BC). The two greatest cities, Mohenjo-daro and Harappa, emerged circa 2500 BC along the Indus River valley in Punjab and Sindh.

The civilization, with script of its own, urban centers, and diversified social and economic system, was rediscovered in the 1920s after excavations at Mohenjo-daro (which means "mound of the dead") in Sindh near Sukkur, and Harappa, in west Punjab south of Lahore. A number of other sites stretching from the Himalayan foothills in west Punjab, few sites in India in the north, to Gujarat in the south and east, and to Balochistan in the west have also been discovered and studied.

Culture and economy of the Indus People

Indus Valley civilization was mainly an urban culture sustained by surplus agricultural production and commerce, the latter including trade with Sumer in southern Mesopotamia. Both Mohenjo-daro and Harappa are generally characterized as having "differentiated living quarters, flat-roofed brick houses, and fortified administrative or religious centers."[5] Although such similarities have given rise to arguments for the existence of a standardized system of urban layout and planning, such similarities are largely due to the presence of a semi-orthogonal type of civic layout, and a comparison of the layouts of Mohenjo-daro and Harappa shows that they are in fact, arranged in a quite dissimilar fashion. The chert weights and measures of the Indus Valley Civilization, on the other hand, were highly standardized, and conform to a set scale of gradations. Distinctive seals were used, among other applications, perhaps for identification of property and shipment of goods. Although copper and bronze were in use, iron was not yet employed. "Cotton was woven and dyed for clothing; wheat, rice, and a variety of vegetables and fruits were cultivated; and a number of animals, including the humped bull, were domesticated." 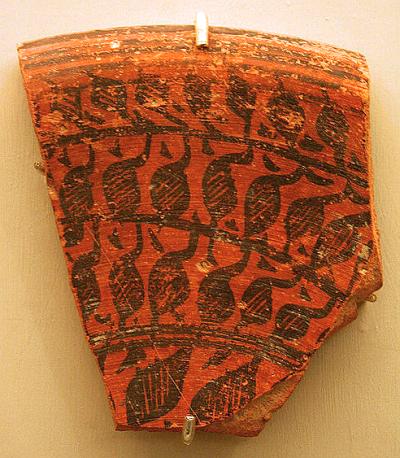 Wheel-made pottery?some of it adorned with animal and geometric motifs?has been found in profusion at all the major Indus sites. A centralized administration for each city, though not the whole civilization, has been inferred from the revealed cultural uniformity; however, it remains uncertain whether authority lay with a commercial oligarchy. There appears to be a complete lack of priestly "pomp or lavish display" that was common in other civilizations.

Remains from the final phase of the Harappa occupation: A large well and bathing platforms
Miniature Votive Images or Toy Models from Harappa, ca. 2500. Hand-modeled terra-cotta figurines with polychromy. By far the most exquisite but most obscure artifacts unearthed to date are the small, square steatite seals engraved with human or animal motifs. Large numbers of the seals have been found at Mohenjo-daro, many bearing pictographic inscriptions generally thought to be a kind of Indus script. Despite the efforts of philologists from all parts of the world, and despite the use of modern cryptographic analysis, the script remains undeciphered. It is also unknown if it reflects proto-Dravidian, proto-Sramanic (Jain), non-Vedic, or is perhaps related to Brāhmī script. The ascription of Indus Valley Civilization iconography and epigraphy to historically known cultures is extremely problematic, in part due to the rather tenuous archaeological evidence of such claims, as well as the projection of modern South Asian political concerns onto the archaeological record of the area. This is especially evident in the radically varying interpretations of Harappan material culture as seen from both Pakistan and India-based scholars

Harrappa to Lahore : It takes about 4 - 5 hours the drive is through the fertile planes of Punjab. One can see the life of villages alsong the road and can also stop at a village to see the sugar can balls being made or Just for a cup of tea.

Tour of Harrappa & Sahiwal from Lahore.

This tour can be taken from Lahore. We leave early morning for Harrappa on arrival at Harrappa we visit the archeological site and museum in detail. We will visit the harrappa ancient construction and also study some of the objects of household use which people used to use in Harrappa 5000 years ago. We will later drive to Clock tower Sahiwal and visit the bazaar there and return to Lahore in the evening. Contact us to book this tour 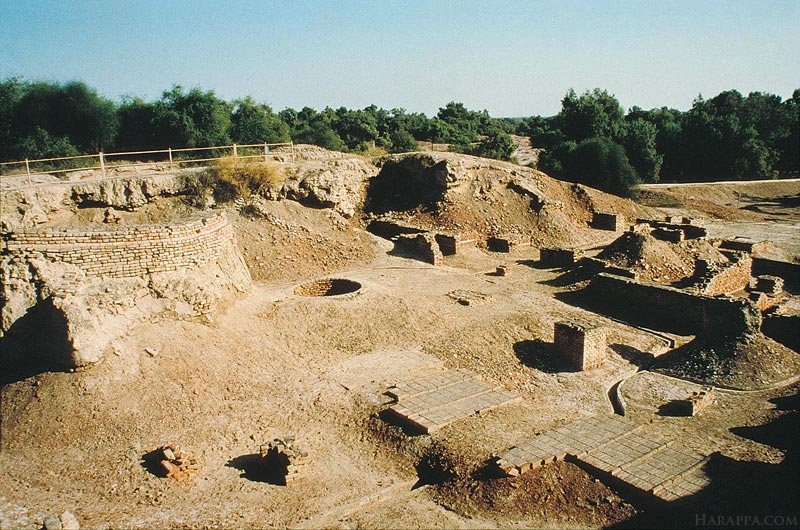 Harrappa Citadal the Later period 2500 BC 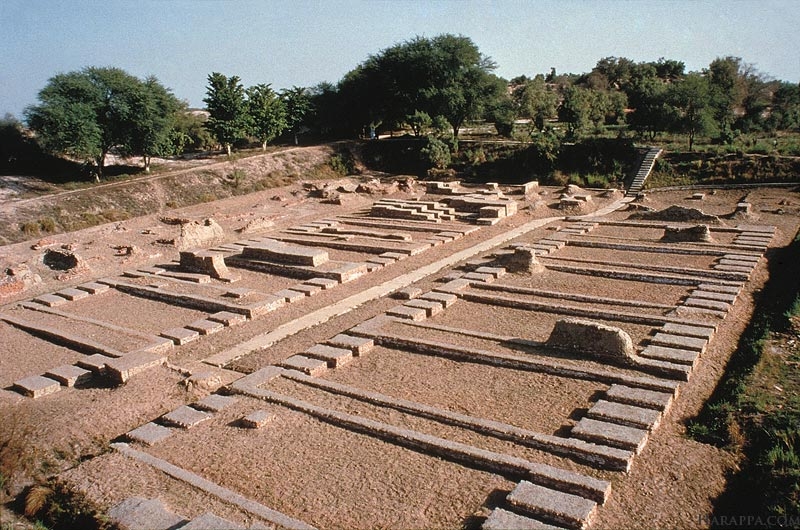 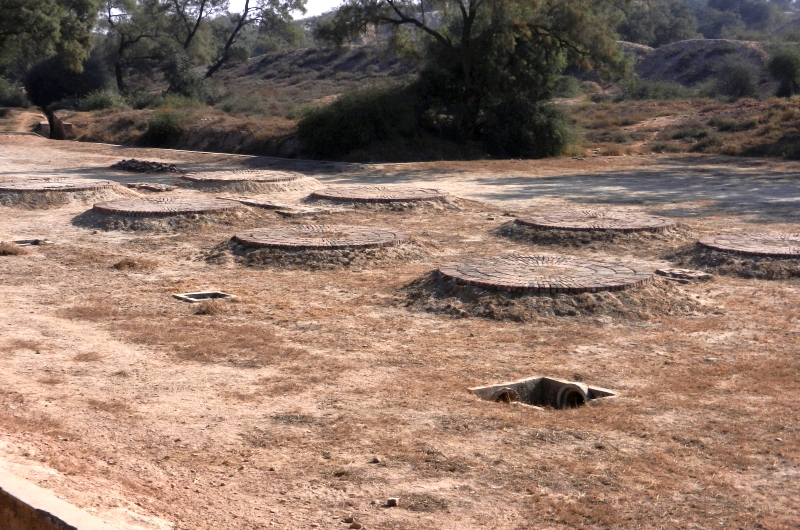 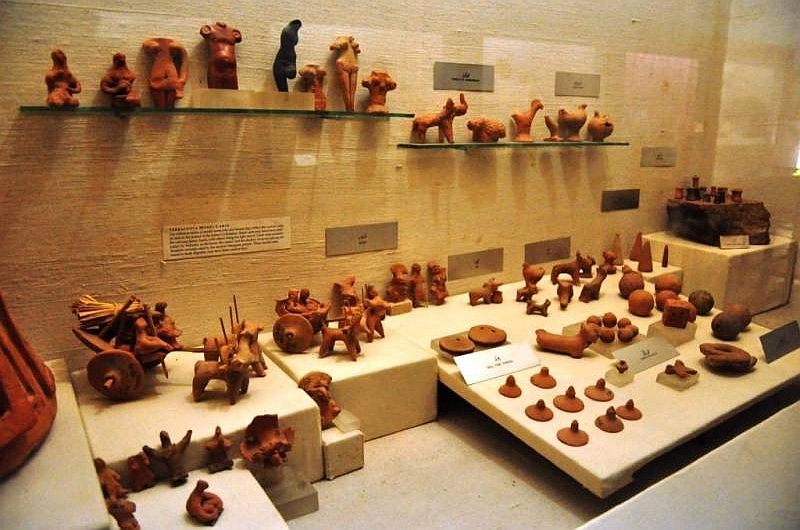 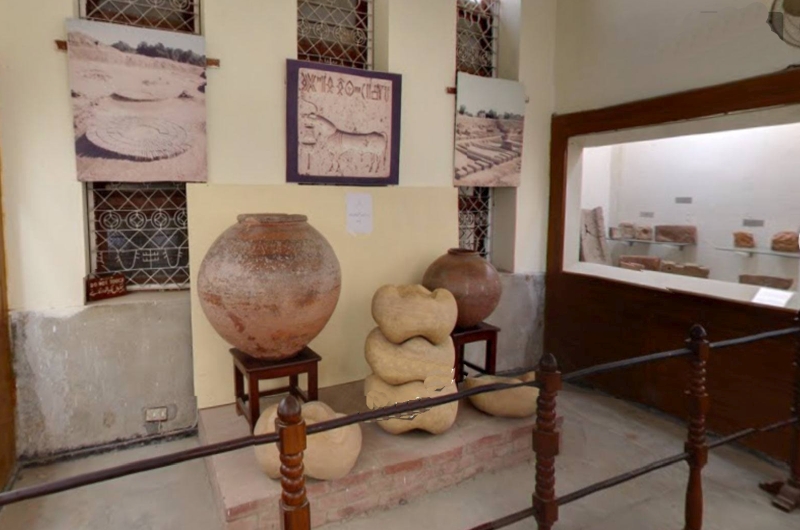 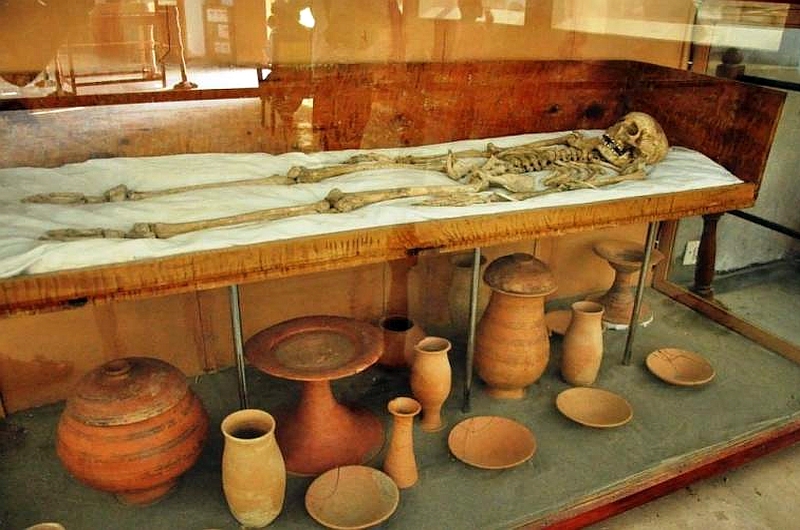 Harrappa Museum pottery found from the graves, above is skelleton of a woman who has bangles and has an injury as well 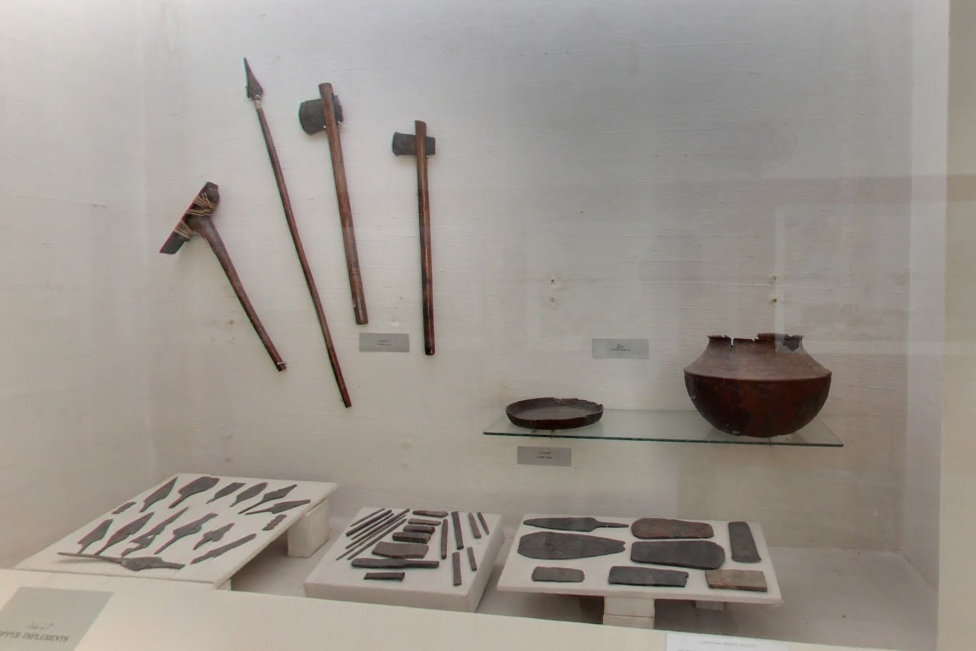 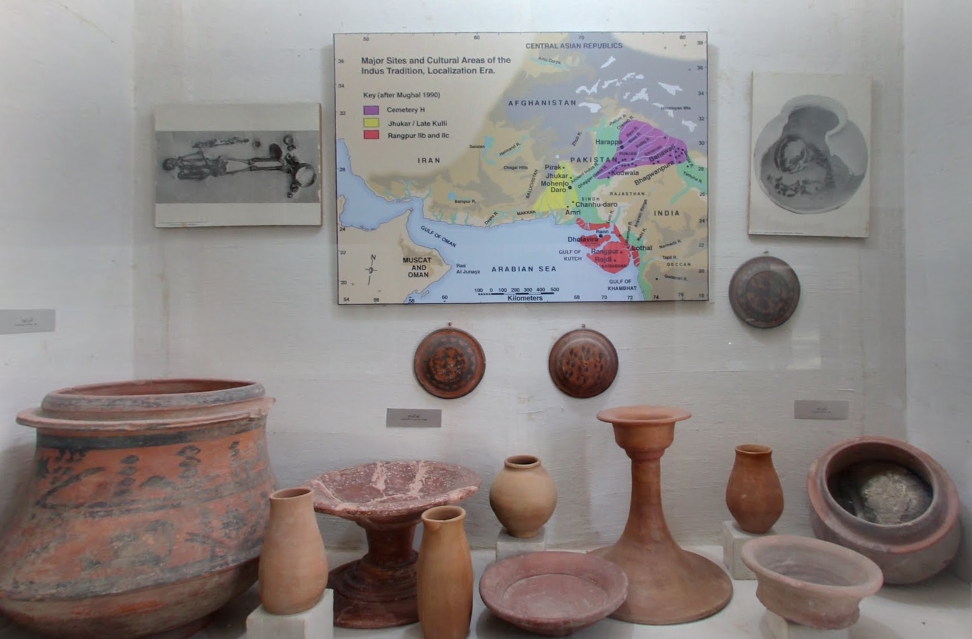 Grave pottery also a pot with a child's body seen