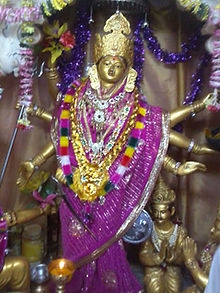 A trip to the Terath (Pilgramage) of past gods. This sacred place of pilgrimage for Hindus specially the devotees of Aadh Shakti Devi Maata is situated in the mountain cave "HINGLAJ" on the river bank of "HINGHOL" at the tail of Kheerthar mountains called Kanraj in tehsil Lyari of Balochistan province of Pakistan. It is considered one of the famous and largest TEERATHS Pilgramage of Subcontinent.

It is about 170 miles 250 KM from Karachi. One has to go by road on main Karachi-Quetta Highway (RCD) up to zero point for about 75 miles. Then by road towards west through Lyari town and then to Signal fauji camp stop,crosssing Aghore River. Then through Goongi River and last stop to "Asha Pura" sarai (INN).

During the Treata Yuga, in the days of PERUSHURAM AVATAR , Rishi Dadechi narrated this story. In the TATARI MONGOL CLAN there lived a king named VICHATAR. He had two sons HINGOL and SUNDER. They belonged to Suria Dynasty of Kshtrya class.They were brave but cruel and lived luxurious lives. Their empire was adjacent to China. The people who lived in these countries belonged to Chandra Dynasty of Kshtrya Class and were followers of LORD SHIVA. 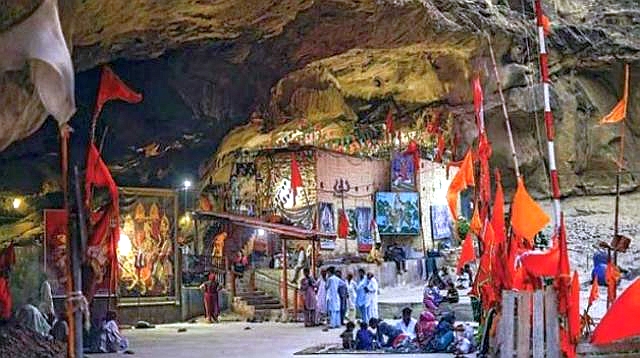 Prince sunder attacked the neighbouring countries and killed thousands of people and looted gold ornaments and demanded royalties from them. The people then prayed to Lord SHIVA to save them from the cruel prince by fulfilling their prayers and request , Lord SHIVA granted a boon where GANESH DEVA killed the demon prince Sunder in three days. After the death of Prince Sunder , his brother Hingola became furious and swore to take avenge his brother's death.

He underwent penance and by his austerity for years he received the boon that no living being in the three worlds could kill him with any sort of weapon and his death will only occur at a place where Sunlight does not penetrate. He thereafter defeated other kings, extended his reign with terror and cruelty. He referred to himself as HINGOl DEVA. 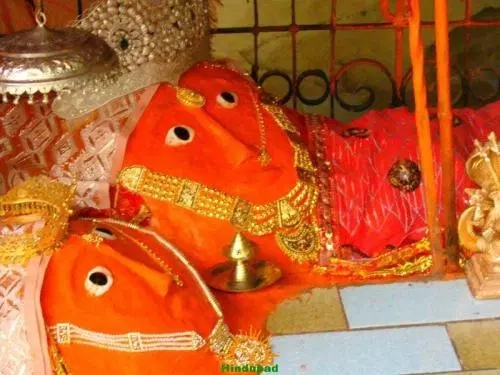 People became very sick and tired in his reign and they performed great Yagna Hawan in their Devi Mata Temple in order to get rid of HIngol , the King. Devi Mata appeared and promised to kill Hingol.Hingol came in SATA DEEP, presently located in Balochistan and went inside a dark cave where Devi Mata with her wooden weapon TRISHUL killed him. In his last moments of life hingol prayed to Devi Mata that in future this place may be called after his name as HINGAL TEERATH and so the place came to be known.

According to another story in the PURAN , once SATI the consort of LORD SHIVA and the daughter of King Daksha was annoyed with her father for not inviting LORD SHIVA in the ceremony of Yagna. She jumped to in Agni Havan Kunda and burnt herself. LORD SHIVA then became furious and came and took the dead body of SATI and started roaming in all the dishas and there was danger created all over the world. Hence LORD VISHNU cut the body of SATI in pieces with his Sudarshan Chakra in order to cool down LORD SHIVA's anger.

The pieces of SATI'S body fell at different places; the head fell at KUNRAJ mountain and was so called as HINGLAJ TEERATH of SHAKT DEVI MATA. 50 pieces at different places and were known as DEVI TEERATH ASTHANS also by differant names. There is no doubt that HINGLAJ TEERATH is very old and remained famous even during Mahabharat period when King Jaidrath of Sindh constructed Devi temples. When King Sikander of Yoonan, Europe when invaded India, he fought with King Balram at Bali Kot Fort and stayed at Hingol River. At that time, yatri devotees were performing HInglaj Yatra and they were safe.

Samrat Vikramjeet, the king of India also visited Hinglaj as yatr after conquering all of India. Raja Todarmal of Mughal regime also visited this teerath. Other Rajput rajas like Bihari Mal, Raja Bhij Singh, Raja Madhoo Singh, Raja Jagat Singh of Jaipur, Ram Devji Pir of Rajasthan with his Army chief Agva Laloo Jakhraj also came to Hinglaj for yatra, Dada Mekhan the great saint of Gujarat also came to Hinglaj Teerath and he was called first KAPRI of Mata and after this all the Yatris are called KAPRIS. Kapris wear mala of Thumra in their neck