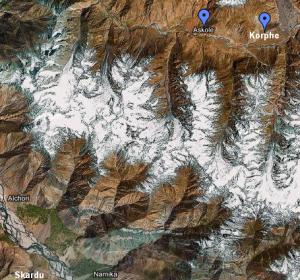 Korphe  is a small subsistence farming village in northeastern Pakistan, situated at the foot of the Karakoram mountain range along the banks of the Braldu River.

Korphe has achieved international attention because of the work carried out by mountaineer Greg Mortenson and his Central Asia Institute (CAI) which has specialized in raising money from all over the world in order to provide good quality schooling for the children of Korphe and similar villages throughout the region, including Afghanistan. How this came to pass has been extensively documented in the book Three Cups of Tea written by Mortenson and journalist David Oliver Relin and the Young Readers edition of Three Cups of Tea adapted by Sarah Thomson.

Three Cups of Tea is a New York Times bestselling book by Greg Mortenson and David Oliver Relin published by Penguin in 2006. The book describes Mortenson's transition from a mountain-climber to a humanitarian committed to reducing poverty and educating girls in Pakistan and Afghanistan. He did this by co-founding the Central Asia Institute, which has built over 131 schools in the most remote areas of the countries, educating over 58,000 students. 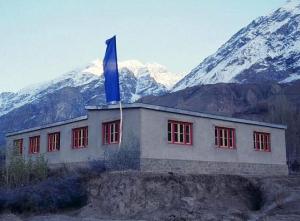 In 1993, Greg Mortenson attempted to climb K2, the world's second highest mountain, in the Karakoram range of northern Pakistan, as a way of honoring the memory of his deceased sister Christa. He was planning to lay her beautiful amber necklace on the summit of K2.[5] After more than 70 days on the mountain, Greg and three other climbers had their ascent interrupted by the need to complete a 75-hour life-saving rescue of a fifth climber. After getting lost during his descent, he became weak and exhausted, and by chance alone, instead of arriving in Askole, where his porters awaited, he came across Korphe, a small village built on a shelf jutting out from a canyon. He was greeted and taken in by the chief elder of Korphe, Haji Ali.

To repay the remote community for its hospitality, Mortenson promised to build a school for the village. After difficulties in raising capital, Mortenson was introduced to Jean Hoerni, a Silicon Valley pioneer who donated the money that Mortenson needed for his school. In the last months of Hoerni's life (Hoerni was dying from leukemia), he co-founded the Central Asia Institute, endowing the CAI to build schools in rural Pakistan and Afghanistan.

Mortenson faced many daunting challenges in his quest to raise funds for the building of more than 55 schools in Taliban territory, including death threats from Islamic mullahs, long periods of separation from his family, and being kidnapped by Taliban sympathizers.

Reflecting on the state of the post-9/11 world, Mortenson argues that extremism in the region can be deterred through collaborative efforts to alleviate poverty and improve access to education, especially for girls. Formerly, schooling focused on the boys, but educated boys tend to move to the cities to find jobs, and seldom return. By contrast, educated girls tend to remain in the community and pass their enhanced knowledge to the next generation. Thus, Mortenson suggests, educating girls has more of a lasting benefit for the community.