Larkana or Larkano is the fourth largest city of Sindh Province, Pakistan. Formerly the city was called Chandka which was changed in 1901. In August 2000 Larkana celebrated its hundred years of existence with the current name. Larkana name is derived from "Larik" a tribe that lived in the region and was in majority. It is located on the south bank of the Ghar canal, 40 miles south of Shikarpur town, and 36 miles north-east of Mehar and about 410 kilometers from Karachi via Indus highway and 500 Kilometers via National highway.

Larkana has in its proximaty the most important discoveary of the ruins of an urban civilization at Mohen-jo-daro. It is only 28 km from the City. The archeological site was discovered in 1922 by Sir John Marshal. The remains show that it was a planned city with saperate ares for rich poor and Industrial people. More details about moen Jo Daro.

The early periods of Larkana's history are buried in the ruins of Moen Jo Daro and other archeological sites nearby. The area being close to the bank of Indus was fertile and prosperous at all times.

Not much is written but being close to Sukkur whach was at the center of the government and litrature Larkana must overwhelming city.

British after conquering Sindh started irrigation canals and Larkana got a lot of importance. British made Larkana the headquarters of Larkana District and Larkana Taluka. For some time Larkana and rest of Sindh was part of the Bombay Presidency of British India. The city lay on the route of the North-Western Railway, and the population according to the 1901 census of India was 14,543.

The Imperial Gazetteer of India reads:

The country surrounding Lārkāna is fertile and populous, and perhaps the finest tract in the whole of the province: The spacious walks, well laid-out gardens, and luxuriant foliage, have gained for Lārkāna the title of the 'Eden of Sind.' It is one of the most important grain marts of Sind, and is famous for a variety of rice called sugdāsi. There is a large local traffic in metals, cloth, and leather. The principal manufactures are cloth of mixed silk and cotton, coarse cotton cloth, metal vessels, and leathern goods. The town contains a dispensary, an Anglo-vernacular school attended by 80 pupils, and a vernacular school with three branches, attended altogether by 379 pupils. 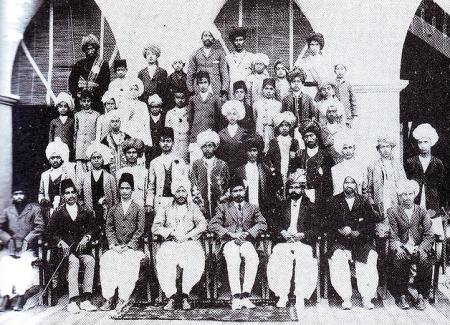 Larkana has two monuments which were made in the memory of President Sukarno of Indonesia and Ata Turk of Turkey, besides that there are interesting bazaars a Hindu temple and the house of Bhutos. An other local object of interest is the tomb of Mir Shahzaib Khan Jalbani, according to Nadeem wagan's article who was a military officer of [Mir Danish Nawaz Khan Jalbani], and died in 1735. Of modern buildings the most noteworthy are the Collector's office, a fine domed building with an ornamental Darbār hall; erected in 1902 ; and a neatly-built school and boarding- house for the, sons of zamīndārs, erected by public subscription in the same year. This school has 60 inmates and teaches English and Sindī. The municipality, established in 1855, had an average income of Rs. 46,000 during the decade ending 1901. In 1903-4 the income was Rs. 54,000. 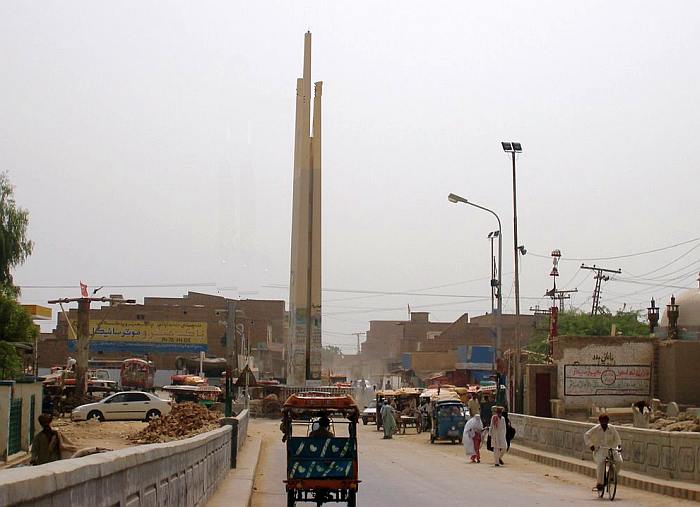 Chandka Medical College (CMC), was built by former Prime Minister Zulfiqar Ali Bhutto for the people of Larkan, it was inaugurated on 20 April 1973 as 4th medical college of the Sindh.  Second Batch of 250 students was admitted in 1974. due to shortage of accommodation as a result of increasing number of admissions, one, four story, girls hostel & two boys hostels were constructed,. Now it has six boys hostels and two girls which can accommodates about 1100 students.

The Chandka Medical College, is recognized by Pakistan Medical & Dental Council (PMDC). The College of Physicians & Surgeons Pakistan (CPSP) has also established its regional center at CMC Larkana. CPSP, has started conducting FCPS-I, FCPS-II and MCPS Examination CMC, Larkana center since 1999. the results (Passing Percentage) of candidates appearing theory examinations is comparable with other centers of the country.

The Chandka Medical College is upgraded to a medical university, Shaheed Mohtrama Benazir Bhutto Medical University (SMBBMU) on 12 April 2008, due to the efforts taken by Professor Surgeon Sikandar Ali Shaikh, who was principal of CMC at that time and later became the first Vice Chancellor of the SMBBMU. Dr. Sikandar Ali Shaikh retired in 2011. As of Oct 2012, Dr Akbar Hyder Soomro is the VC of SMBBMU and Dr Asadullah Mahar is the principal of the Medical College.

Larkana is surrounded by fertile land in which all kind of fruits and vegetables are cultivated, including potatoes, melons, olives, oranges, peas, carrots, cucumber, mangoes and guava. Some 10 km from the city, sugarcane is cultivated and processed at the sugar mill established in 1990 in Nau Dero village, the birthplace of the former prime minister of Pakistan Zulfikar Ali Bhutto and where Benazir Bhutto was raised.

Various kinds of birds roam in the city, including migratory birds coming to the region during the winter from Russia and Siberia. They live on wetlands on the right bank of the Indus River near Mohenjo-daro.

Larkana Railway Station is located in the center of Larkana City.It is now reestablished and has many facilities.(JDS)

Mohen-jo-daro Airport is located near Mohen-jo-daro, 28 kilometres away to the south of Larkana city, and 5 kilometers away from Dokri. Only Fokker airplanes of PIA land at this airport.