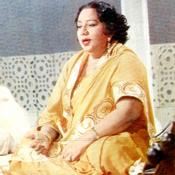 Roshan Ara Begum, originally named Waheedunnisa Begum, was born in Bombay. She lived in an environment that was alive with music. Her mother, Chanda Begum, a singer of repute, was quick to discern her daughter's musical talent. She brought her to Ustad Abdul Karim Khan, an eminent representative of the Kirana gharana, who accepted her as a pupil and prayed, "O Allah, let this girl illumine the world of music, and let your light rest upon her throat." Her mentor's prayer was more than amply answered, and she became known as Roshan Ara (Decorator of Light).

She made her debut as a singer in Bombay, where her songs were broadcast on radio. In 1936 she found an opening as a playback singer for the famous director Sohrab Modi in his historical film, “Pukar”. Later, she rendered Firoz Niazami's compositions for the films “Jugnu” and “Kismat”.

In 1944, she received an offer of marriage from a music lover, Chaudhry Ahmed Khan, a senior police officer in Bombay. She consulted her teacher, Ustad Abdul Karim, and agreed to be married on one condition: that she would not give up music. She kept her promise and continued to sing throughout her life. After independence, she and her husband came to Pakistan in 1948 and settled down in Lalamusa, a small town between Gujrat and Jhelum in Punjab. Though universally acclaimed as "Malika Mauseequi" (Queen of Music) in Pakistan and Saraswati (a goddess of the Hindu Pantheon) in India, she was a remarkably simple person. Her humility, sincerity, and gentleness added to her stature as an artist. A devout Muslim, she was an early riser and began her riyaz (musical practice) after her morning prayers. Being childless, she adopted a boy and girl, upon whom she showered her maternal love.

As a vocalist, the most important feature of her singing was her stress on melody. She had an outstanding dexterity and control over a wealth of ragas. At a l954 musical conference in Bombay, her renditions of Jinjhoti Thumri and Bhairvi Thumri, the raga for which she is still considered the ultimate interpreter, astonished a group of distinguished Ustads and Pundits with her divine and soul-stirring voice.

While the Pakistani public has been more receptive to Salamat Ali Khan, Amanat Ali Khan, and Fateh Ali Khan, these masters still listen to Roshan Ara's recordings for their own entertainment. She won the President's Pride of Performance Award in 1960 and was the first female vocalist to be awarded the Sitara-e-Imtiaz.

Roshan Ara Begum's death of a heart attack on 6 December 1982 left the Kirana gharana in Pakistan totally bereaved, although there are still a few exponents of this school of music in India 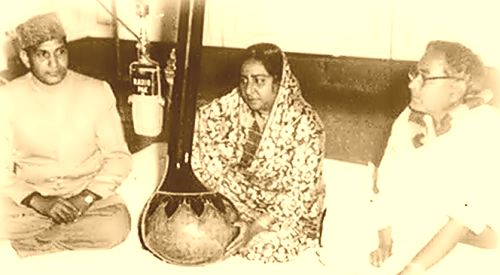