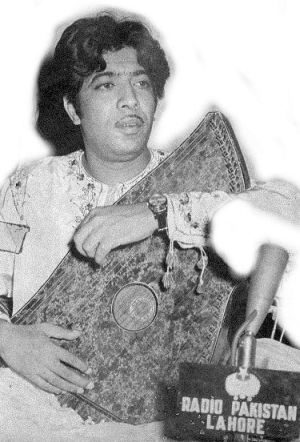 Ustad Fateh Ali Khan is the most highly acclaimed and celebrated living classical singer of Pakistan. He is the leading representative of the eighth generation of the Patiala gharana. Fateh Ali was born in 1934 /35 in Patiala (now in East Punjab). He is the second son of famous classical singer Ustad Akhtar Ali Khan, who headed the Patiala gharana of classical singing in his own time, and the younger brother of the renowned Ustad Amanat Ali Khan, with whom he sang for more than thirty years. Their grandfather, Ustad Ali Bukhsh, was the founder of their musical dynasty. According to Fateh Ali, his grandfather was awarded the honorary title of "General" (Jernail) by the music-loving viceroy of India and became popularly known as Jernail Ali Bukhsh.

Fateh Ali Khan started his musical training at the age of 7 side by side with his brother, Amanat Ali. The young duo sang on radio for the first time in 1945. They were soon noticed by a well-known local connoisseur, who invited them to take part in a music conference which was being held at the YMCA Hall. This was their first public performance.

Fateh Ali Khan has been a bright star in the musical firmament for over three decades. He recorded several songs for films, proving that classical music can still hold its own in the film world. A duet composed by music director Rashid Attre for W. Z. Ahmad's Urdu film "Wada," rendered by Fateh Ali and the late Zahida Perveen, became very popular upon its release in 1957. He also recorded the title music for "Koel," a film the by famous music director Khawaja Khurshid Anwar. These successes were followed by other recordings for popular films.

His greatest desire is to transfer his knowledge of classical music to the next generation. To fulfil this desire, he is grooming his two sons, a nephew, and a few others. He has also accepted an assignment with a local girls' high school to impart his knowledge to students. However, he is not satisfied with individual efforts. He believes that something must be done on the national level to preserve and promote the art of classical singing. Ustad Fateh Ali Khan is a recipient of the President's Pride of Performance Award