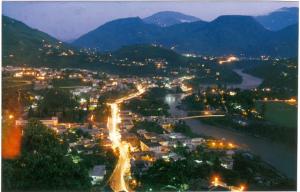 Muzaffarabad is the capital of Azad Kashmir in Pakistan. It is located on the banks of the Jhelum and Neelum rivers. It is bounded by North-West Frontier Province in the west, by the Kupwara and Baramulla districts of on the Indian side of the Line of Control in the east, and the Neelum District of Azad Kashmir in the north.

Muzafarrabad was the epicenter of the October 2005 earthquake that killed over 75,000 people. The city was devastated and has been rebuilt

Once can visit Muzaffarabad from Islamabad by road it is about 4 Hours drive via Murree or 4 & half hour drive via Abbottabad.

Muzaffarabad offer breathtaking views of the Tarai mountains the foothills of Himalaya. There is a 5 star hotel run by the local chain Pearl Continental Hotels.

There are two historical forts on opposite sides of the Neelum River. Red Fort and Black Fort The construction of the Red Fort was finally completed in 1646 by Sultan Muzaffar Khan, the founder of Muzaffarabad city. After the Mughals took over Kashmir, the fort lost its importance. The Mughals were more interested in Kabul, Bukhara, and Badakshan. During the period of Durrani rule, however, the fort again once again assumed its importance. Maharaja Gulab Singh and Rambir Singh, the Dogra rulers, reconstructed and extended the fort for their political and military operations.

Towards the middle of 1947, the Dogra forces left, leaving the fort abandoned. The architecture of the fort shows that great experts in design and structure participated in its construction. It is surrounded on three sides by theNeelum River formally known as the Kishenganga River. The northern part of the fort had terraces with steps leading to the bank of the river. The eastern side was very well protected from the hazards of flood waters, but some parts on the north side have suffered damage. There used to be an inn at the entrance to the fort, but only traces of that structure remain now.

located in east of Muzaffarabad. Due to its scenic beauty, velvet green plateaus and wonderful climate, it is visited by many local tourists. The view of the summit of the mountain peaks spell bounds a tourist. It is also the shrine of Saint Shah Hussain Bukhari where Devotees take pilgrimage to rejuvenate. The adjacent Pirchinassi, phawna da Danna and the areas in the bottom of Pirchinassi are also worth seen and ideal for hiking, trekking and camping activities. Kashmir Tourism Department has also constructed a tourist lodge at Saran.

Situated at the height of 1640 meters above sea level at a distance of about 16 kilometers westward from Muzaffarabad. From Shaheed Gali a trek of 4 Kms leads towards a spot namely "Sri Kot". A tourist is bound to be fascinated by the serenity for the backdrop of the area. A tourist Rest House is available for accommodation at Shaheed Gali.

Located at a distance of 19 Km from Muzaffarabad, is a gateway to Neelum valley. There is also A mini zoo and a fish hatchery. Tourism Department has constructed a Tourist Rest House here, which is very popular among tourists.

Chikkar is a beautiful summer station at a distance of 46 Kms from Muzaffarabad on top of the mountain. The outstanding features of this beautiful place are its climate and sceneries. 10 Kms from Chikkar is another worth seen hill station in the middle of dense green pine forests and is linked by a fair weather road.

Muzaffarabad can be visited for different activities like hiking, trekking and camping at the foothills regions of the Pir Chinassi, Saran, Sun Bun, Muskhi, Sakki and Jarran.

If you have time try typical Kashmri Dishes like Goshtawa etc but its hard to find real one.

Neelam Valley is a picturesque valley of Kashmil it is 200 Km long and situated at the North & North-East of Muzaffarabad. Neelam valley runs parallel to Kaghan Valley only separated by snow-covered peaks, some of the peaks are over 4000m above sea-level. Excellent scenic beauty, panoramic views, towering hills on both sides make this an excellent excursion from Muzaffarabad.

Situated at a height of 1371m, it is the sub-divisional headquarters of the area. An attractive place known for its variety of fruit. All necessary facilities viz bazaar, post office, banks, hospital, telephone exchange are present.

Neelum - at a distance of about 9 Km from Athmuqam, Neelum is situated on the right bank of the river Neelum at 1524m above sea-level with facinating scenery.The panaromic lush green valley is profound in fruit and wildlife.

Sharda - a breath-taking green spot at an altitude of 1981m. Shardi and Nardi are two mountain peaks overlooking the valley, reputedly named after legendary princess Sharda. It has a captivating landscape with numerous springs and hill-sides covered with trees. On the right bank, opposite Sharda, the Neelum is joined by the Surgan Nallah along which a track leads to Nurinar Pass and through it to the Kaghan Valley. Ruins of an old Buddhist University can also be found in Sharda.

Kel - a small valley situated at a height of 2097m. This is an another picturesque place in the Neelum Valley. The Shounter Nallah joins river Neelum at this place and leads to Gilgit Agency (Northern Areas) over the Shandur Pass at 4420m.

The curling Jehlum river passes through from East to West between the high green mountains joining river Neelum at Domel in Muzaffarabad. An artifical lake at Subri was created due to a cloud burst over the sorrounding hill during 1975. Further along the road, 24 Km from Muzaffarabad is located the small town of Ghari Dupata. A further 35Km, lies the famous town of Chakothi. This place sees a large concentration of troops because of the proximity of the Cease-Fire-Line and the constant aggression by Indian forces. Other notable places of interst in the valley are Chikar, Loonbagla, Lungian and Danna, all known for their scenic beauty and healthy climate.

This is the most fascinating valley in Azad Kashmir. A fair-weather road branches off for Leepa from Naile 45 Km from Muzaffarabad, climbs over Reshian Gali at 3200m high and then descends into the Leepa Valley. It spell-bounds everyone who visists this valley. Dao Khan is well recognized for its natural beauty and renowned for its calm and peaceful atomsphere. Deep in the heart of the valley lies Leepa village at 1921m above sea-level. Its lush green river fields in summer and typical wooden Kashmiri houses present a wonderful view. Walnut, apples, cherries and honey of Leepa are very popular.

Note: Leepa valley is not open to foreigners as it is the subject of random firing and shelling by Indian troops from across the Cease-Fire-Line. Some villages in this valley cannot even cultivate their land because of indiscriminate firing.