Pakistan's Flag was officially adopted on 14 August 1947 the date of independence of Pakistan from the British when India was divided into two countries. coat of arms adopted 23 March 1956.

The Pakistan Flag was designed by Ameer-ud-din Khidwai. The national flag of Pakistan is dark green in colour with a white bar, a white crescent in the centre and a five-pointed star. The significance of the colour and symbols used in the Pakistan Flag is as follows:

Pakistani's are proud of the flag and display it everywhere. On 14th August The independence day you can nearly see a Flag on every single Pakistani house, Car & Motorcycle. All public places are decorated with numerous Flags.

Some facts about the Pakistani flag

It was designed and adapted on 11th August 1947

At UN Pakistan flag flies at same level as other no other flag is higher except the flag of UN itself.

How to construct the proper Pakistani flag

Official sizes of Pakistani flags are :-

To draw the flag make a box measuring for example 10.25 x 8.25 piece of paper approximately A4 size take 1/4th part of it on the left and paint rest as green 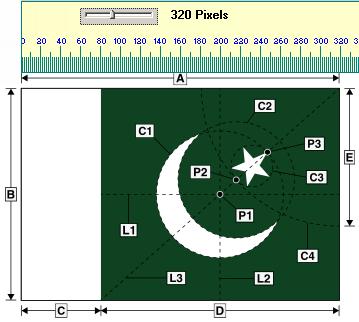