Sheikhupura or (Shekhupura, Shekhu Pura)  (Urdu: شيخوپورہ) is an industrial city in the Punjab province of Pakistan located northwest of metropolis of Lahore. It is known for its historical places, and is commonly known locally as "Qila (fort) Shaikhupura, because of the fort in the city, constructed by the Mughal Emperor Jahangir. Sheikhupura is a day Excursion from Lahore. Famous Hiran Minar is located here.

The history of Sheikhupura goes back to 1000 BC. Historical research has established the fact that Sangla or Sakala was the capital of Punjab once, and it was here that Alexander the Great of Macedonia (Sikandar e azam) in 325BC fought one of his most serious battles of his career. Its name is spoken of, firstly in the pages of Tuzk-e-Jahangiri as Jahangirpura, after the name of Prince Salim Nur u ddin muhammad Jahangir.

During the reign of Emperor Jahangir (1605 to 1627), Sheikhupura had the status of royal hunting ground. In Tuzke-Jahangiri, Empror Jahangir wrote during the events in 1607:

“ On the day of Tuesday, I reside in Jahangirpura, my hunting ground. According to my order, a Minar and a grave for my deer, Mansraj, were constructed here. ”

Mughal Emperor Jahangir granted the estate of Sheikhupura to Syed Usman, the father of Shah Bilal, a religious preceptor of the line of Qadiriyyah.

Over the whole district, the period between the decline of Mughal Empire after the death of Mughal Emperor Aurangzeb and the rise of Sikh confederacies was one of utter confusion and anarchy. The successive shocks of invasion from the northwest, and the devastation caused again and again by the invading armies of Nadir Shah.

Nadir Shah and Ahmad Shah Abdali (from Afghanistan) (1724-1773) almost completely ruined the prosperity of the tract. After the death of Aurangazeb, Muslim power was broken by the Sikhs who ruled through various misls or small to medium sized groups. Nadir Shah and Ahmad Shah Abdali led raids that further weakened local Muslim rule. Several raids were made by the Bhangi Sardars, a Sikh community that laid to waste many Mosques and Madrasas. Finally around 1780, Ranjit Singh, a sikh ruler defeated the grandson of Ahmad Shah Abdali and later captured this district. The sikhs were routed by the British around 1850 and it stayed under British rule till independence in 1947.

In 1851, Tehsil Sheikhupura worked under Gujranwala. The Artimapal Secretary Chief Commissioner Lahore wrote a letter to the Department of Wealth in 1855 to combine the Tehsil Sheikhupura with the District Lahore but it was never done. As soon as it became a DistrictZillah, a lot of lawyers came to practice. Under of Sir Gungha Ram, district courts and hospitals were constructed in the city.

Hiran Minar or (Minate of Deer) is situated in Sheikhupura, Pakistan. It was constructed by Emperor Jehangir as a monument to Mansraj, one of his pet deers. 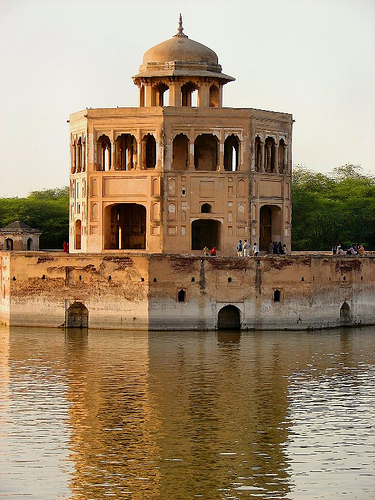 The structure consists of a large, almost-square water tank with an octagonal pavilion in its center, built during the reign of Mughal emperor Shah Jahan; a causeway with its own gateway connects the pavilion with the mainland and a 100-foot-high minar, or minaret.

At the center of each side of the tank, a brick ramp slopes down to the water, providing access for royal animals and wild game. The minar itself was built by Emperor Jahangir in 1606 to honor the memory of a pet hunting antelope named Mansraj.

Unique features of this particular complex are the antelope's grave and the distinctive water collection system. At each corner of the tank (approximately 750 by 895 feet in size), is a small, square building and a subsurface water collection system which supplied the tank; only one of these water systems is extensively exposed today.

Another special feature of Hiran Minar is its location and environment: the top of the minar is perhaps the best place in the province of Punjab to get a feel for the broader landscape and its relationship to a Mughal site

Looking north from the top of the minar, one can see a patch of forest which is similar to the scrub forest vegetation of Mughal times, while to the west are extensively-irrigated fields, a product of the late nineteenth and early twentieth centuries, but similar in size and appearance to the well-irrigated fields of the Mughal period.