We offer special Excursions to Sibi from Quetta as well as from Sukkur please contact us for more details. 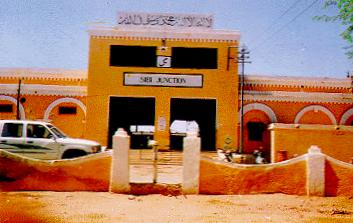 The history of the town goes back to 13th century and due to its exposed position between the mouths of the Harnai and Bolan passes it had suffered frequent assaults and sieges - including one by the British in 1841. During British rule the town became an important junction on the Sind-Peshin railway where the Harnai line and the Quetta loop line meet, near the entrance of the Bolan Pass, 88 m southeast of Quetta. According to the 1901 census of India the population of Sibi was 4551. In 1903 the Victoria Memorial Hall was built from public funds, a piped water supply to the town was provided by military funds from the river Nari at a cost of Rs.115,000.

Sibi is a historical city of Balochistan. It is sometimes also known as Sivi[citation needed], purportedly named for a Hindu princess. Most of its population belong to Panni Pashtuns, Panni is the branch of Ghourghust and brother of a famous Pashtun tribe Kakar. Sibi is an agricultural city. Pashtoons (Panni) are the owner of 98% of landmass, while 2% land is owned by Balochs. There is also a historical fort in Sibi. This fort was built in the period on Hindu Rule and still exist in a bad condition

Sibbi is visited as a stop over during the journey from Sukkur to Quetta The imortant place to visit is the Sibbi Museum and the little bazaar in the city. One can also have an excursion of Sibbi either from Quetta or Sukkur.