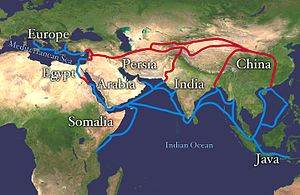 The Silk Road or Silk Route is a term which refers to the complex historical network of ancient trade routes across the Afro landmass  of Eurasian which connected East, South, and Western Asia with the Mediterranean and European world in the past and to some extent even today. It also connected parts of North and East Africa. Making the route Extending to 4,000 miles or 6,500 kilometers. The name Silk Road originates from the lucrative Chinese silk trade along this wide route. Silk trade  began during the Han Dynasty (206 BC – 220 AD) during 114BC the central Asian sections of the trade routes were expanded as per the the missions and explorations of Zhang Qian.

Trade on the Silk Road played a significant role in the development of the civilizations of China, Pakistan, India, Persia, Europe and even Arabia. Not only Silk was traded but the route also transported many other goods. Besides trade the Silkroad also helped transfer various technologies, religions and philosophies, culture, art, historical records as well as the bubonic plague (the "Black Death"), also traveled along the Silk Routes. 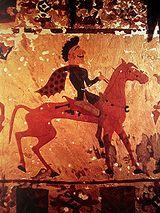 What were the routes of Silkroad?

Overland routes (See the red lines in the map on right)

On westwards from the ancient commercial centers of China, the overland, intercontinental Silk Road divided into two routes the northern and southern routes after passing the Taklimakan Desert and Lop Nur. Northern route went through the central Asia and the southern route through the high mountains of Pakistan

The northern route started at Chang'an (now called Xi'an n China), Chang'an was the capital of the ancient Chinese Kingdom however later in Han dynasty the capital was moved further east to Luoyang. The route was defined about the 1st century BC as Han Wudi in order to put an end to harassment by nomadic tribes along the route.

The northern silk route crossed northwest through the Chinese province of Gansu from Shaanxi Province, and split into three further routes, two following the mountain ranges to the north and south of the Taklamakan Desert to rejoin at Kashgar; and the other going north of the Tian Shan mountains through Turpan, Talgar and Almaty (in what is now southeast Kazakhstan). The routes split again west of Kashgar, with a southern branch heading down the Alai Valley towards Termez (in modern Uzbekistan) and Balkh (Afghanistan), while the other traveled through Kokand in the Fergana Valley (in present-day eastern Uzbekistan) and then west across the Karakum Desert. Both routes joined the main southern route before reaching Merv (Turkmenistan).

The northern route was ideal for for caravans as the mountain passes are much easier there. This part of Silk Road brought to China many goods such as "dates, saffron powder and pistachio nuts from Persia; frankincense, aloes and myrrh from Somalia; glass bottles from Egypt, and other expensive and desirable goods from other parts of the world." In exchange, the caravans sent back bolts of silk brocade, lacquer ware and porcelain. Another branch of the northern route turned northwest past the Aral Sea and north of the Caspian Sea, then and on to the Black Sea. 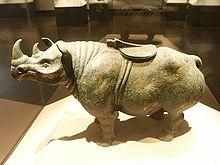 The southern route or Karakoram route was mainly a single route running from China, through the Karakoram mountains, where it persists to modern times as the international paved road the Karakorum Highway connecting Pakistan and China. It then set off westwards, but with southward spurs enabling the journey to be completed by sea from various points in southern Pakistan's Sindh. Crossing the high mountains, it passed through northern Pakistan, over the Hindu Kush mountains, and into Afghanistan, rejoining the northern route near Merv. From there, it followed a nearly straight line west through mountainous northern Iran, Mesopotamia and the northern tip of the Syrian Desert to the Levant, where Mediterranean trading ships plied regular routes to Italy, while land routes went either north through Anatolia or south to North Africa. Another branch road traveled from Herat through Susa to Charax Spasinu at the head of the Persian Gulf and across to Petra and on to Alexandria and other eastern Mediterranean ports from where ships carried the cargoes to Rome.

The southwest route is believed to be the Ganges/Brahmaputra Delta which has been the subject of international interest for over two millennia. Strabo, the 1st Century Roman writer, mentions the deltaic lands: ‘Regarding merchants who now sail from Egypt…as far as the Ganges, they are only private citizens...’ His comments seem to be interesting since the Roman beads and other materials are being found at Wari-Bateshwar ruins, the ancient city with roots from much earlier before the Bronze Age presently being slowly excavated beside the Old Brahmaputra in Bangladesh. Ptolemy’s map of the Ganges Delta, a remarkably accurate piece of mapping, showed quite clearly that his informants knew all about the course of the Brahmaputra River, crossing through the Himalayas then bending westward to its source in Tibet. It is doubtless that this delta was a major international trading center, almost certainly from much earlier than the Common Era.

Gemstones and other merchandise from Thailand and Java were traded in the delta and through it. A famous Chinese archaeological writer Bin Yang, whose work, ‘Between Winds and Clouds; The Making of Yunnan’, published in 2004 by the Columbia University press and some earlier writers and archaeologists, such as Janice Stargardt strongly suggest this route of international trade as Sichuan-Yunnan-Burma-Bangladesh route. According to Bin Yang, especially from the 12th century the route was used to ship bullion from Yunnan (Gold and Silver being among the minerals in which Yunnan is rich), through northern Burma, into modern Bangladesh, making use of the ancient route, known as the ‘Ledo’ route. The emerging evidence of the ancient cities of Bangladesh, in particular Wari-Bateshwar ruins, Mahasthangarh, Bhitagarh, Bikrampur, Egarasindhur and Sonargaon are believed to be the international trade centers in this route.

Impacts of Silkroad on the world

Silkroad had great influence over the cultures of the world. The stories of merchants and their goods all mingled cultures and new dimensions of life were exchanged between the people of far off countries. it also brought religions, philosophies and literature from East to West and West to East

Richard Foltz, Xinru Liu and others have described how trading activities along the Silk Road over many centuries facilitated the transmission not just of goods but also ideas and culture, notably in the area of religions. Zoroastrianism, Judaism, Buddhism, Christianity, Manichaeism, and Islam all spread across Eurasia through the Silkroad and other trade routes. The spread of religions and cultural traditions along the Silk Roads, according to Jerry H. Bentley, also led to syncretism. One example was the encounter with the Chinese and Xiongnu nomads. These unlikely events of cross-cultural contact allowed both cultures to adapt to each other as an alternative. The Xiongnu adopted Chinese agricultural techniques, dress style, and lifestyle. On the other hand, the Chinese adopted Xiongnu military techniques, some dress style, and music and dance. Of all the cultural exchanges between China and the Xiongnu, the defection of Chinese soldiers was perhaps the most surprising. They would sometimes convert to the Xiongnu way of life and stay in the stepps for fear of punishment

Many artistic influences were transmitted via the Silk Road, particularly through Central Asia, where Hellenistic, Iranian, Indian and Chinese influences could intermix. Greco-Buddhist art represents one of the most vivid examples of this interaction.

These artistic influences can also be seen in the development of Buddhism, where, for instance, Buddha was first depicted as human in the Kushan period. Many scholars have attributed this to Greek influence. The mixture of Greek and Indian elements can be found in later Buddhist art in China and throughout countries on the Silk Road. 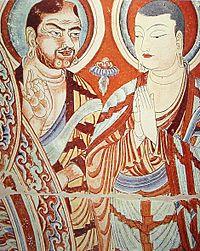 The transmission of Buddhism to China via the Silk Road began in the 1st century AD, according to a semi-legendary account of an ambassador sent to the West by the Chinese Emperor Ming (58–75 AD). During this period Buddhism began to spread throughout Southeast, East, and Central Asia. The Buddhist movement was the first large-scale missionary movement in the history of world religions. Buddha’s community of followers, the Sangha, consisted of male and female monks and laity. These people moved through India and beyond to spread the ideas of Buddha. Extensive contacts started in the 2nd century AD, probably as a consequence of the expansion of the Kushan empire into the Chinese territory of the Tarim Basin, due to the missionary efforts of a great number of Central Asian Buddhist monks to Chinese lands. The first missionaries and translators of Buddhists scriptures into Chinese were either Parthian, Kushan, Sogdian or Kuchean.

One result of the spread of Buddhism along the Silk Road was displacement and conflict. The Greek Seleucids were exiled to Iran and Central Asia due to a new Iranian Dynasty called the Parthians at the beginning of the 2nd century BCE, and as a result the Parthians became the new middle men for trade in a period when the Romans were major customers for silk. The Parthians were Buddhists and, because they found themselves in a main trade centre on the Silk Road, the city of Marv became a major Buddhist centre by the middle of the 2nd century. Knowledge among people on the silk roads also increased when Emperor Ashoka of the Maurya dynasty (268-239 BCE) converted to Buddhism and raised the religion to official status in his northern Indian empire. 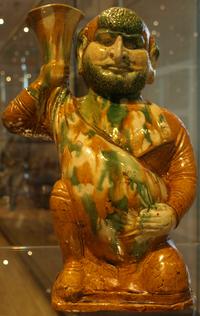 From the 4th century onward, Chinese pilgrims also started to travel on the Silk Road to India, in order to get improved access to the original Buddhist scriptures, with Fa-hsien's pilgrimage to India (395–414), and later Xuan Zang (629–644) and Hyecho, who traveled from Korea to India. The legendary accounts of the holy priest Xuan Zang were described in a novel called Journey to the West, which told of trials with demons, but also the help of various disciples on the journey.

There were many different schools of Buddhism travelling on the Silk Road. The Dharmaguptakas and the Sarvastivadins were two of the major nikaya schools. These were both eventually displaced by the Mahayana, also known as “Great Vehicle”. This movement of Buddhism first gained influence in the Khotan region. The Mahayana, which was more of a “pan-Buddhist movement” than a school of Buddhism, appears to have begun in north western India or Central Asia. It was small at first and formed during the 1st century BCE, and the origins of this “Greater Vehicle” are not fully clear. Some Mahayana scripts were found in northern Pakistan but the main texts are still believed to have been composed in Central Asia along the Silk Road. These different schools and movements of Buddhism were a result of the diverse and complex influences and beliefs on the Silk Road.

During the 5th and 6th centuries BCE, Merchants played a large role in the spread of religion, in particular Buddhism. Merchants found the moral and ethical teachings of Buddhism to be an appealing alternative to previous religions. As a result, Merchants supported Buddhist Monasteries along the Silk Roads and in return the Buddhists gave the Merchants somewhere to stay as they traveled from city to city. As a result, Merchants spread Buddhism to foreign encounters as they traveled.[43] Merchants also helped to establish diaspora within the communities they encountered and overtime their cultures became based on Buddhism. Because of this, these communities became centers of literacy and culture with well-organized marketplaces, lodging, and storage. The Silk Road transmission of Buddhism essentially ended around the 7th century with the rise of Islam in Central Asia.

Testimonial:-Me & My husband had a great time on your tour Thank you. Patricia Douglus (Karachi Pakistan)