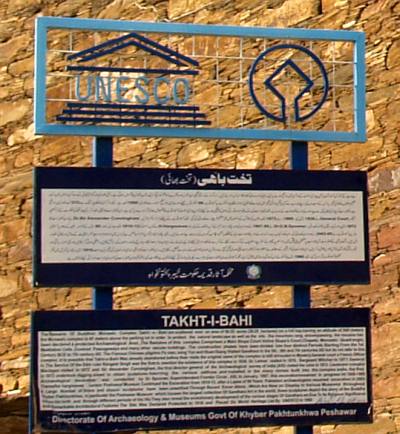 Takht Bhai (or Takht Bahi) is an archaeological site in Khyber-Pakhtunkhwa province of Pakistan. It is considered the most well preserved Buddhist monetary in Pakistan-India. It is one of the 6 World Heritage sites in Pakistan.

According to USESCO the site existed earlier than Buddhist period (2BC to 8AD) and was a Zoroastrian complex which  was then converted into a Buddhist monastery. It is dated to the 1st century BC. The complex is regarded by archaeologists as being particularly representative of the architecture of Buddhist monastic centers from its era. It was listed as a UNESCO World Heritage Site in 1980.

Locally today the word Takht means throne or above or high and Bahi means water this name may have been given to the site as there are 2 water spring on the top of the site.

Other meaning of word Takht Bhai may have different explanations. In Avestan, takht means "capital" and bahi means "good", so the whole word means "the good capital".

Present day Takht Bahi is a town with a busy bazaar and a specially restaurants that serve a Kebab called Chapli Kebab. The surrounding area is famous for sugar cane, wheat, maze, vegetable, and orchards cultivation.

Tour of Takht bahi can be taken either from Peshawar or from Islamabad. It is usually a full day Excursion during which we see Takht Bahi and Shahbaz Gari and Bazaar of Charsadha all combined. Travel & Culture offers this tour from either Peshawar or Islamabad for US$ 92.00 per person. Contact us to book today

There are four main areas of the Takht Bahi complex:

The Stupa Court, a cluster of stupas located in a central courtyard.

The monastic chambers, consisting of individual cells arranged around a courtyard, assembly halls, and a dining area.

A temple complex, consisting of stupas and similar to the Stupa Court, but of later construction.

The Tantric monastic complex, which consists of small, dark cells with low openings, which may have been used for certain forms of Tantric meditation.

Additional structures on the site may have served as residences or meeting halls, or filled secular purposes.[4] All of the buildings on the site are constructed from local stone, and are mortared with lime and mud. 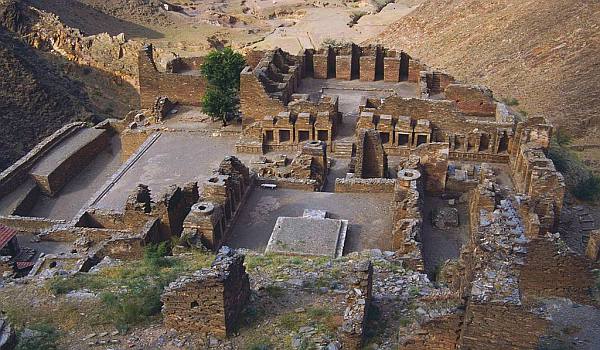 The monastic complex likely was founded in the early 1st Century BC. Despite numerous invasions into the area, Takht Bhai's hilltop location seems to have protected it from destruction, unlike many comparable early Buddhist monastic complexes. The complex was occupied continuously until the modern era, when charitable funding for the site ended. Archaeologists have divided the history of the complex at Takht Bhai into four periods, beginning in the 1st Century BCE.[4] This first era continued until the 2nd Century CE, and is associated with the Kushan king Kanishka, as well as early Parthian and later Kushana king.[4] The second construction period, which included the creation of the Stupa Court and assembly hall, took place during the 3rd and 4th Centuries CE. A third construction period, associated with the later Kushan dynasty and the Kidara Kushana rulers, occurred during the 4th and 5th centuries. The final construction period, which saw the creation of the so-called Tantric complex, took place in the 6th and 7th Centuries CE, and was overseen by invading Hun rulers.

The first modern historical reference to these ruins was made in 1836 by the French Officer, the Buddhist remains are in a village named Mazdoorabad.

Explorations and excavations on this site began in 1864. A significant number of objects from the site can be found in the British Museum.[5] The site underwent a major restoration in the 1920s. 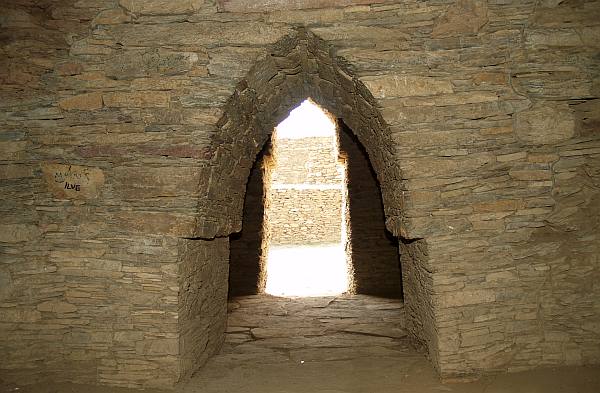 The villages of Thordher (Old name Said Ghani Kalae), Lund Khwar, Sher Garh, Sarop shah, Sehri-Bahlol, Pathai, Mazdoorabad, Fazl-e-abad, Gangai, Hathian, Jalala, Pirsaddi and Takkar are other historical places in the vicinity of Takht-Bhai. The most historical location in the era is Sehri Bahlol. This Buddhist monastery is situated on Malakand Road. The word "Sehri-Bahlol" has been explained by various people in different ways. Local people claim that this is a Hindko word meaning "Sir Bahlol", a prominent political and religious leader of the area. However, the name is not as old as the village of Sehri-Bahlol.