How to Perform Haj

How to Perform the Rituals of Hajj and Umrah
by Shaikh Muhammad As-Salih Al-Uthaimeen
In The Name of Allah, Most Gracious, Most Merciful 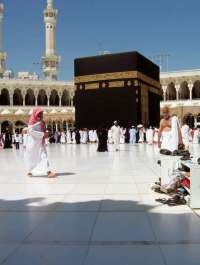 In the forenoon of the eighth day of Dhul-Hijja, a pilgrim purifies himself once again by bathing as he did before Umrah in the place in which he is staying, if convenient. He puts on his Ihram and says: " Here I am for Hajj. Here I am, oh Allah, here I am. Here I am. You have no partner. Here I am. Surely all praise, grace and dominion is yours, and you have no partners." If he fears that something will prevent him from completing his Hajj he should make a condition when he makes his intentions, saying: " If I am prevented by any obstacle my place is wherever I am held up." If he has no such fear, he doesn't make this condition. A pilgrim goes to Mina and there prays Dhuhr, Asr, Magrib, Isha and Fajr, shortening his four unit prayers so as to make them two units each, without combining them.

When the sun rises, he goes to Arafah and there prays Dhuhr and Asr combined at the time of Dhuhr, making each one two units. He remains in Namira Mosque until sunset if possible. He remembers Allah and makes as many supplications as possible while facing the Qibla. The Prophet--may the peace and blessing of Allah be upon him--prayed thus: "There is no Deity but Allah alone. He has no partner. All dominion and praise are His and He is powerful over all things.

If he grows weary it is permissible for him to engage in beneficial conversation with his companions or reading what he can find of beneficial books, especially those concerning Allah's grace and abundant gifts. This will strengthen his hope in Allah. He should then return to his supplications and be sure to spend the end of the day deep in supplication because the best of supplication is the supplication of the day of Arafah. At sunset he goes from Arafah to Muzdalifah and there prays Magrib, Isha, and Fajr. If he is tired or has little water, it is permissible for him to combine Magrib and Isha. If he fears that he will not reach Muzdalifah until after midnight, he should pray before he reaches it for it is not permissible to delay prayer until after midnight. He remains there, in Muzdalifah, making supplications and remembering Allah till just before sunrise.

If he is weak and cannot handle the crowd during Ar-Ramy, it is permissible for him to go to Mina at the end of the night to stone the Jamrah before the arrival of the crowd. Near sunrise, a pilgrim goes from Muzdalifah to Mina. Upon reaching it he does the following:

He throws seven consecutive pebbles at Jamrah Al-Aqaba which is the closest monument to Makkah, saying Greatest," as he : "Allah is the throws each pebble. He slaughters the sacrificial animal, eats some of it, and gives some to the poor. Slaughter is obligatory on the Mutamati and Qiran. 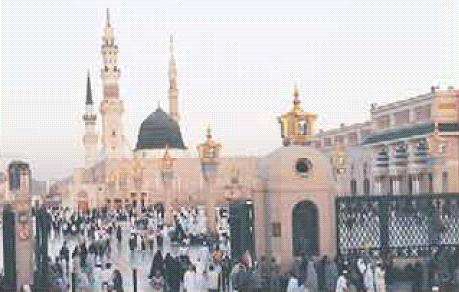 He shaves or clips his hair; shaving is preferable. A woman clips her hair the length of a finger-tip. These three should be done in the above order if convenient, but
there is no restriction if one precedes another.

With that, one is allowed to come out of Ihram. He can wear other clothing and do everything that was lawful before Ihram except engaging in marital relations. He goes to Makkah to perform Tawaf Al-lfadha and Sa'yi, also for Hajj. It is Sunnah to put perfume on before going to Makkah.

With the completion of this Tawaf and Sa'yi, a pilgrim is allowed to do everything that was lawful before Ihram, including engaging in marital relations. After performing Tawaf and Sa'yi, he returns to Mina to spend the nights of the eleventh and twelfth days there. He stones the three Jamrah in the afternoon of both the eleventh and twelfth days. He starts with the first Jamrah, which is furthest from Makkah, then the middle one, and lastly Jamrah Al-Aqaba. Each one should be stoned with seven consecutive pebbles accompanied by Takbeer. He stops after the first and middle Jamrah to make supplications facing the Qibla. It is not permissible to stone before noon on these two days. It is best to walk to the Jamrah, but riding is permissible.

If he is in a hurry after stoning on the twelfth day, he leaves Mina before sunset. But if he wishes to prolong his stay, which is best, he spends the night of the thirteenth in Mina and stones that afternoon in the same manner as on the twelfth day. When he is ready to return to his country, he makes Tawaf Al-Wadaa, which is seven circuits around the Ka'bah. Menstruating women
and women experiencing postnatal discharge are not obligated to perform Tawaf Al -Wadaa.

1. A pilgrim goes to Madina before or after Hajj with the intention of visiting the Prophet's mosque and praying in it. Prayer there is better than
a thousand prayers elsewhere except in the Holy Mosque in Makkah.

2. Upon reaching the mosque he prays two Rakaas of salutation or performs any obligatory prayer that is due.

4. In a state of purity, he goes to pray in Qubaa Mosque.

5. He goes to Al-Baqee to visit Uthman's grave-- may Allah be pleased with him. He stands before it and greets him saying: "May the peace, mercy and blessing of Allah be upon you, oh Uthman--Prince of the believers. May Allah be pleased with you and grant you a good reward on behalf of Muhammad's people." He greets any other Muslims in Al-Baqee.

6. He goes to Uhud and visits the grave of Hamza--may Allah be pleased with him--and the other martyrs there with him. He greets them and preys to Allah to grant them forgiveness, mercy, and pleasure.

The following is incumbent upon the Muhrim for Hajj or Umrah:

1. That he be committed to Allah's religious obligations upon him such as prayer in its time (in congregation for men).
2. That he avoids what Allah has prohibited such as obscenity, inequity, and  disobedience. if anyone undertakes Hajj therein. Let there be no obscenity, nor wickedness, nor wrangling during Hajj ~ [2:197].

a. He shouldn't cause the loss of any of his hair or nails. A prick by a thorn and the like is unobjectionable, even if there is bleeding.
b. He shouldn't perfume himself, his clothing, his food or his drink after entering Ihram. He should also abstain from cleansing himself  with scented soap. There is no harm in what remains of the effect of perfume used prior to Ihram.
c. He shouldn't touch, kiss, etc. his spouse out of passion and, even  worse, shouldn't have sexual intercourse.
d. He shouldn't be wed or propose to a woman for himself or others.
e. He shouldn't wear gloves, although there is no harm in wrapping  the hands in cloth. This ruling goes for both men and women.
The following pertains specifically to men:
a. He cannot cover his head with something that touches it, although  there is no harm in the use of an umbrella, the roof of a car or tent for shade. There is also no harm in carrying his baggage atop his head.
b. He cannot wear a shirt, turban, hooded cloak trousers, or shoes.  Only if he is unable to obtain an Ezar or sandals can he wear
trousers or shoes.
c. He cannot wear anything with the same qualities of the above  mentioned such as an Abea', Qubaa, hat, undershirt, etc. It is permissible for him to wear sandals, rings, glasses, a hearing aid. a watch, worn on his wrist or hung from his neck, or a speech aid.

It is permissible for him to cleanse himself with unscented cleansers and to wash and scratch his head and body, even if some of his hair falls unintentionally. In such a case there is no obligation on him because of it. A woman cannot wear a Niqab or Burqa'. The Sunnah is for her to uncover her face except if men not related to her might see her, in which case it is obligatory for her to cover her face during Ihram and otherwise. Allah is the giver of success. May His blessings be upon our Prophet Muhammad and all of his family and companions. By the needy before Allah, Muhammad As-Salih Al-Uthaimeen.

Budget Umrah Package No. 1 (Departure from Karachi on 18th September 2022)