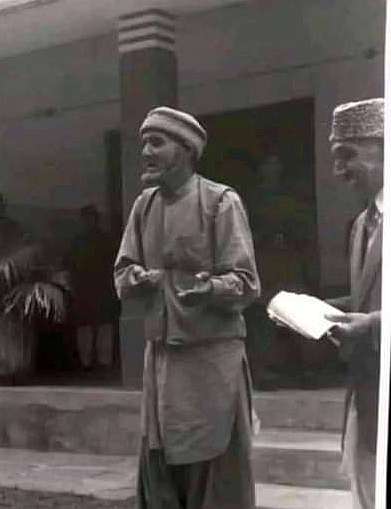 Who or Why, or Which or What,
is the Akhund of Swat?

Is he tall or short, or dark, or fair,
Does he sit on a stool or sofa, or chair
or squat
The Akhund of Swat?

Is he wise or foolish young or old?
Does he drink his soup and his coffee cold,
or Hot,
The Akhund of Swat?

Some one, or no body knows Iwot,
Who or which or, why or what
is The Akhund of Swat?

( Written By Edward Lear 1862 . Akhund of Swat was the king of Swat before English He was a sufi who led his nation. Later after the English conquest English made His Son Jehanzeb the Wali (Owner) of Swat and in 1969 Swat came in full control of Government of Pakistan.

Swat is known as the Switzerland of Pakistan. The river Swat is a clear water river starting from the Ushu rage of mountains to the spread of the valley of Swat. It is on of the most green valleys of the Northern Pakistan and is well connected to the rest of Pakistan. There are regular flights from Islamabad to Swat and back. One can also get here either from Peshawar (160 KMs) or Islamabad.(250 KMs) The valley of Swat is located in the middle of foothills of Hindukush mountain range. The main town of the valley is Mingora and Saidu Sharief.

Swat is a place for leisure Lover , Hikers , and archeologist. There are many comfortable hotels where one can stay a while to relax. In Kalam upper Swat there are some very pleasant walks since weather is pretty pleasant one can easily walk over the hills for hours and enjoy the unspoiled nature. The Swat is garden of Ashoka and was a prosperous land in the Buddhist times (2nd BC to 5 AD) There are at least over 100 archeological sites in the valley less then 10% of the are excavated. One can explore some of those sites in a half day tour of Swat.

There are many hotels in different towns of the valley.

Transfers to & From Swat Valley

Islamabad or Peshawar to Swat
250 KMs 5- 6 Hours. Drive in the morning from Islamabad stop at the confluence of Kabul & Indus rivers later continue to Swat via Charsadha, stop at different village bazaars and pass the Malakand pass. One can have Lunch at a local restaurant on the way. After Malakand pass you enter the valley of Swat. View the Churchill's picket and Shingardar Stupa on the way. Takht e Bhai most well preserved Buddhist monastery is on the way before Malakand pass time permitting can visit this archeological site too. (This will make the trip about 7- 8 Hours )

Swat - Besham
110 KMs 3 Hours. Leave Saidu Sharief via the upper Swat road at Khwaza khela we will take a right turn to the Shangla pass (7000 Ft) Road is lush green with numerous kinds of flora and pine trees. Have a local Pakistan tea at the pass and continue to Besham . Besham is the first main town as you come from Swat on the Karakorum Highway.

Half day Saidu Sharief
Visit the Swat museum, Butkara archeological site ( Where there are 215 Votive stupas and one main Stupa from 2nd century BC - 5th Century AD ) Also have a detailed walk in Mingora bazaar and shop some of the best shawls and handicrafts of the region.

Half Day Archeological Sites
Visit Butkara1 Butkara 2 , Udegaram , and Shingardar Stupa all sites of the Kushans Period. Later a detailed lecture in Swat museum on the chronology of Swat.

Full day walk Kalam to Ushu
A dream of a hiker. Great scenic walk through the green mountains to the glacier of Ushu have picnic on the way return to Kalam coach or walk back.

Swat valley has a history dating back to about 2000BC, when the area was inhabited by Indus valley inhabitants and were making pottery similar to that of Mohen Jo Daro. In 516BC the area was under the persians and was known as the Gandhara the eastern most province of persia. In 325BC Alexander came here it is sait that Alexander was in hurry when he came to Swat he was unable to spend time here, Local people in Swat valley even today say that if he had time to relax at the bank of Swat River and felt the cool breeze coming from the snow capped Ushu mountain and had listened to the echo of the flutes coming from the mountain of the valley he would never have left this heaven on earth and today his grave would have been here.

300 years later Kanishka did feel the romance of this valley and left the busy city of Peshawar carrying his capital on horses horses and came to Swat Valley he made Swat the capital of his Gandhara kingdom and remained here. This made Swat a place for Buddhism where Buddhism flourished and reached at its height. The numerous articles found from different archeological sites are the proof of a prosperous and joyful era of this valley.

In the 6th century AD white Huns came and destroyed every site of the Buddhism and wounded and killed the loving people of the valley, After the attack of White Chinese monk and historian Huns Hyun Sang came for pilgrimage of this valley and sadly wrote that most of 1400 monasteries of Swat are either burned or abundant and have been ruined, Most of the monks have left or are dead, those who remain do talk about the Buddhism but they themselves don't know the meaning of the teachings of Buddha.

Even After the brutal invasion of White Huns Swat still remained a pilgrimage place for Buddhist was was ruled and inhabited by Buddhists until Sultan Mehmood of Ghani invaded Swat and last Buddhist Raja Geera was overthrown.

In the end of 15th century this valley was invaded by the Afghan Yousuzais, they pushed the inhabitants of this valley towards the Indus valley thus a new region and nation emerged by the name of Hazara which is still the name of the region and the name of the people living near the confluence of river Indus and Kabul. The new comer Yousufzais were not as bad as White Huns they developed Military rules and their King Sardar Sheikh Milli even wrote poetry which was known at the Conquest of Swat.

Bayazid Ansari wrote his Biography and wrote books like Khairul Bayan which was a book about the laws distribution of land and rules of division. Akhund Zada Daweza wrote "Tazkerah" and "Makhzan" all these were marked as the base of Pushto literature. These two books are considered as the master pieces of Persian and Pushto literature of those days. Akhund Darweza Baba held many religious discussions with Bayazid Ansari.

In 1050 AD great poet of Pushto Khushal Khan Khattak came to Swat. During his stay in Swat, he wrote "Swat Nama" in verse. It was a great contribution to Pushto literature in Swat. "Swat Nama" contains the geographical, cultural, political and historical aspects of the Swat of those days.

After Moghuls in the middle of the 19th century two local rulers Akbar Shah & Mubarak Shah ruled Swat they both tried to rule according to the religion and the culture but as English took over their rule come to an end. From 1863 to 1915 this region was ruled by the neighboring state of Dir than one day the tribes men of Swat held a Jirga in Kabal and they chose Mian Gulshan Zada Abdul Wudood as the Wali of Swat. Mian Gul Wudood was crowned in 1916 and he was popularly called as Bacha Saheb of Swat.

Bacha Saheb was a progressive ruler British accepted his kingdom as semiautonomous Kingdom, he was entitled for a salute of 15 Guns He made Pushto the official language replacing Persian for the first time lands were allotted to the people according inheritance which generated a new era of Khans (Land Lords) who got along well with the king but wanted to keep the poor and farmers underdeveloped. 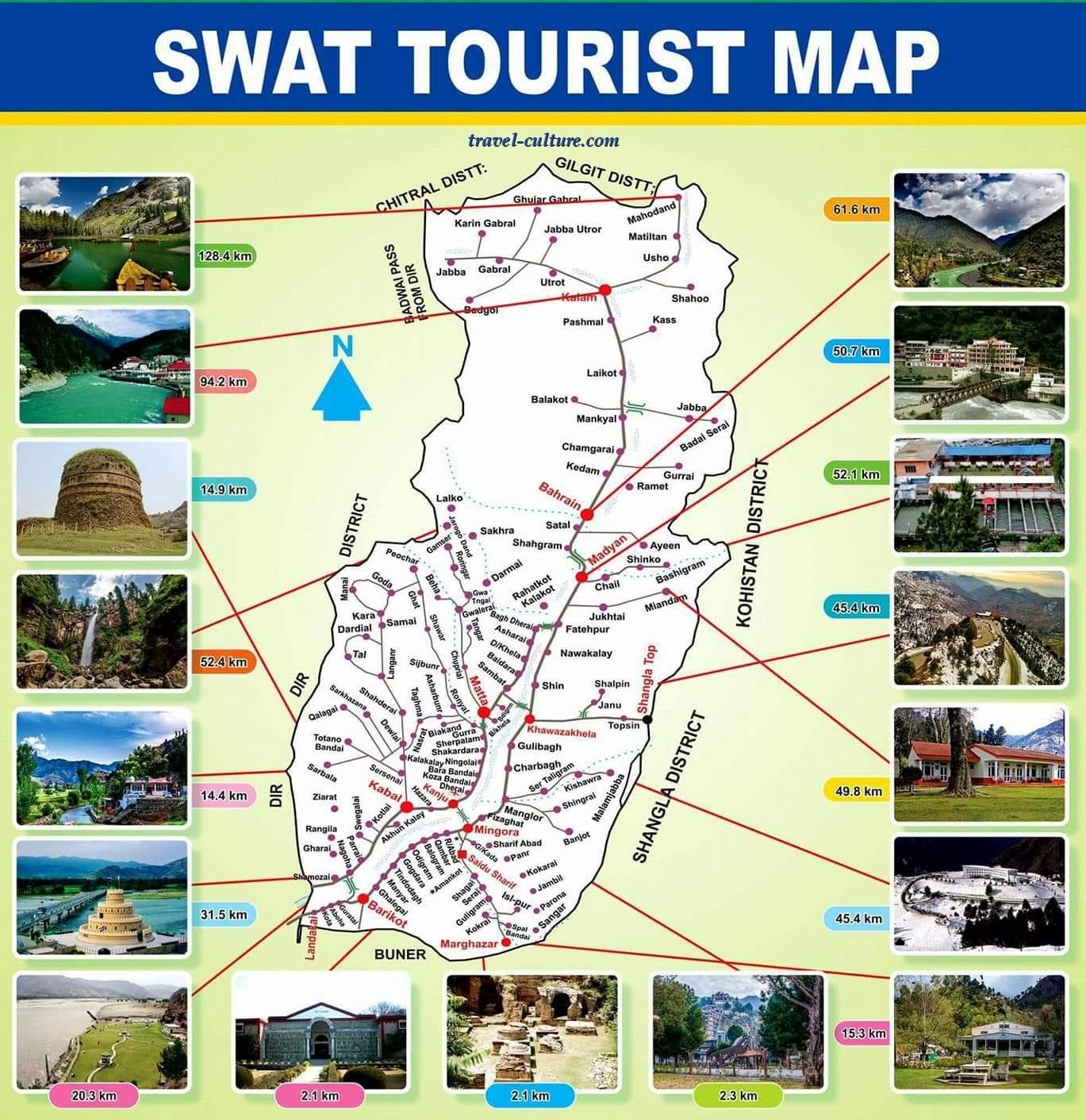