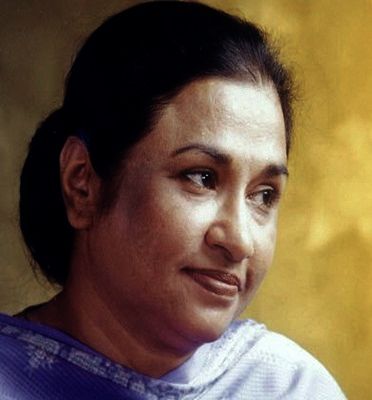 Nayyara Nooor is a Pakistani singer well known as The Tragedy Queen for her sad melodious songs. She has been popular during 80s and 90s.

Nayyara became a singer by chance. What happened was that in the early seventies, she was doing a course with a diploma granted at completion in textile designing from the national college of arts. At that time colleges and universities regularly held all Pakistan contests in various subjects, in which she often participated and won prizes, as well. A little later, she introduced herself to the relevant people in the Pakistan television. In those days, Rafiq Waraij had been affiliated with an entertainment program. He had heard about Nayyara's talents and decided to give her an opportunity to sing. Besides, in the mid-seventies, Nayyara had recorded a lot of geeth and ghazals for Arshad Mehmud for Pakistan television's 'such gup' and 'taal matol'. Moreover, during those days, she was fond of listening to Begum Akhtar's (Nayyara is inspired by Begum Akhtar) ghazals in old fashioned r m p gramophone record players (audio cassette players were not common then) which further enhanced her aptitude in music. Further, in college days, she was accustomed to singing ghazals, which had been originally recorded in Begum Akhtar's voice and Nayyara gained a lot of popularity. In Nayyara's own words: 'Ghazal leaves a profound impact on the listener. The effect is rapid and lasting'.

Following are some ghazals in Nayyara's voice, which were recorded for Pakistan television and which have virtually immortalized the television's image to the general public.

Let us look at some all time great ghazals recorded in her voice:

During her long singing career, she has sung ghazals, geeth, nazm and national songs. Sober and shy, she has always maintained her high singing standards from the beginning. She has also recorded hundreds of songs for the Pakistani films.

Nayyara's versatile voice touches the hearts of her myriad of fans in Pakistan and across the borders alike. For her, fame is the word. Some of her super hit songs are listed here below:

Nayyara's innumerable admirers look forward to listening to her mellifluous voice for many years. Nayyara: Keep on smiling.