Multan is 5th largest city of Pakistan, it is the center of Southern Punjab. The city was known for Saints, Dust & Beggars in the past. This may be true in the olden days but it definitely is a different city these days.

Multan has always enjoyed a great importance in the history. Somehow its people have attracted the Sufi saints so much that it became the abode of Sufism in South east Asia. Multan is known to be the oldest living city in south east Asia, the city had existed in 325BC when Alexander the great came.

Today Multan is a combination of old and the new Pakistan culture. There is a big hustle bustle in the Old town and comfort of a five star hotel and sound streets in the New city. The Old (Purana Shehar) city has a very interesting Bazaar and many elaborately decorated Shrines of the Sufi saints. For a tour of Multan one has to give at least one full day. There are regular flight from all major cities of Pakistan to Multan, beside Trains and Road. Most Itineraries of Multan are combined with Bahawalpur & Uch Sharief.

Note only 4 hotels in Multan can host foreigners so avoind making booking thru booking.com or agoda like sites, book thru a local agent who can tell you about the conditions of staying.

Leave from your hotel Morning or Afternoon drive to the old city "The Fort" Visit Mausoleum Hazarat Bahauddin Zakaria (1182 - 1266) a Sufi saint who traveled all different countries of Islam and learnt the faith of unity . He taught the teachings of sufism to the people in Multan and had this beautiful mausoleum built for himself. The tomb is made of terracotta bricks and is very well decorated with the blue glazed tiles.

Later visit the tomb of Shah Rukn-e-Alam a Sufi saint inspired by his grand father Bahauddin Zakaria and learnt the lessons of Sufism. The tomb in magnificently beautiful and very well restored by the Agha Khan Award of Architecture in 1986. Originally built in 1320 by emperor Ghayasuddin Tughlaq for himself . On his becoming the devote of the saint he preferred it for the saint who Died in 1234. Tomb is an octagonal structure of Baked bricks beautifully decorated with blue & turquoise glazed tiles. After that drive to the tomb of Shah Shams Tabrez A saint having numerous devotes from all faiths& religions . You have a chance to see the prayers of devotes and faces of people coming from different villages and town to have a look of the saint's Mausoleum. Tour ends with a visit to the main bazaar of Multan. A school of colors and happy faces (mind the heat In summer) one can spend hours roaming this bazaar. Book Multan City tour by contacting us.

Multan is famous for the puppet shows a typical string puppet show depicting a legend from the numerous Sufi stories. Watch the puppet later ride the Horse carriages to Dine at a local restaurant.

Leave very early morning to see the ruins of this 5000 years old city of Indus civilization. Return late in the evening. On the way stop at different villages & towns. (Indus Civilization )

Early morning Drive 70 Kilometers to Punjnad. On the way stop at a small village of fishermen community. Punjnad is confluence of 5 rivers . You can have a boat ride here in River Chenab, later continue to Uch Sharief the land which attracted most of the Sufis of the subcontinent. Still the town shows the same mystic feeling. There are many beautiful mausoleums of different saints . We shall see here the tomb of Sheikh Jalaluddin Surkh & Jewindi Bibi both elaborately decorated with blue glazed tiles. After visiting the Bazaar we will return back to Multan. 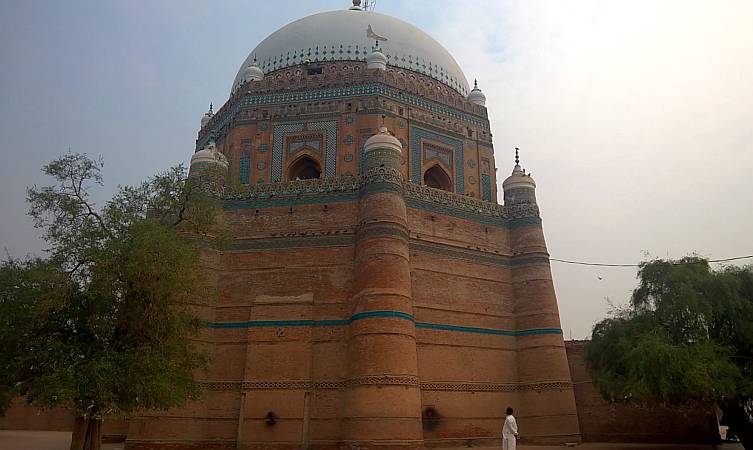 If you stay at Holiday Inn it is only 10 - 15 Minutes easy drive if you stay at a Hotel in the main city it takes about 20 Minutes from Airport. There are Taxis & a Private Van available at the Airport.

95 Kilometers road is very nice and there are not as many stops as such you do get a good view of country side and if you wants you may stop at a school or village on the way.

Bestway is to take a train from Multan and reach Sukkur. There are regular trains leaving 0745 , 0945 , 1120 , 1305. Train journey can be a wonderful experience as you get to see very interesting railway stations and numerous people going & coming. You also get a broader view of the country side.

By road it is 454 Kilometers. Road is well paved but usually there is a lot of Trucks traffic due to which journey be longer the 9 Hours.

348 Kilometers 7 - 8 Hors It is usually recommended with the tour of Harrappa on the way making it a 10 Hours Journey. Road is pretty good there are many small & big towns on the way. One must leave early in the morning stopping at different tea stalls and towns it should take about 3 Hours & 30 Minutes to Harrappa visit the site & museum later continue to Lahore Lunch at a local restaurant (Usually called Truck restaurant ) Arrive Lahore in the evening.