Benazir Bhutto (Born. 21 June 1953 in Karachi) was the first woman to lead a post-colonial Muslim state. She was elected Prime Minister of Pakistan in 1988, only to be deposed 20 months later by the country's military-supported president Ghulam Ishaq Khan who controversially used the Eighth Amendment to dissolve parliament and force an election. She was re-elected in 1993 but was dismissed three years later amid various corruption scandals by then president Farooq Leghari, who also used the Eighth Amendment discretionary powers

Benazir Bhutto was the eldest child of deposed Pakistani premier Zulfikar Ali Bhutto (who was hanged by the Pakistan's military administration under irregular circumstances) and Begum Nusrat Bhutto, who was of Kurdish-Iranian origin. Her paternal grandfather was Sir Shah Nawaz Bhutto, a Sindhi and a key figure in Pakistan's Independence movement. 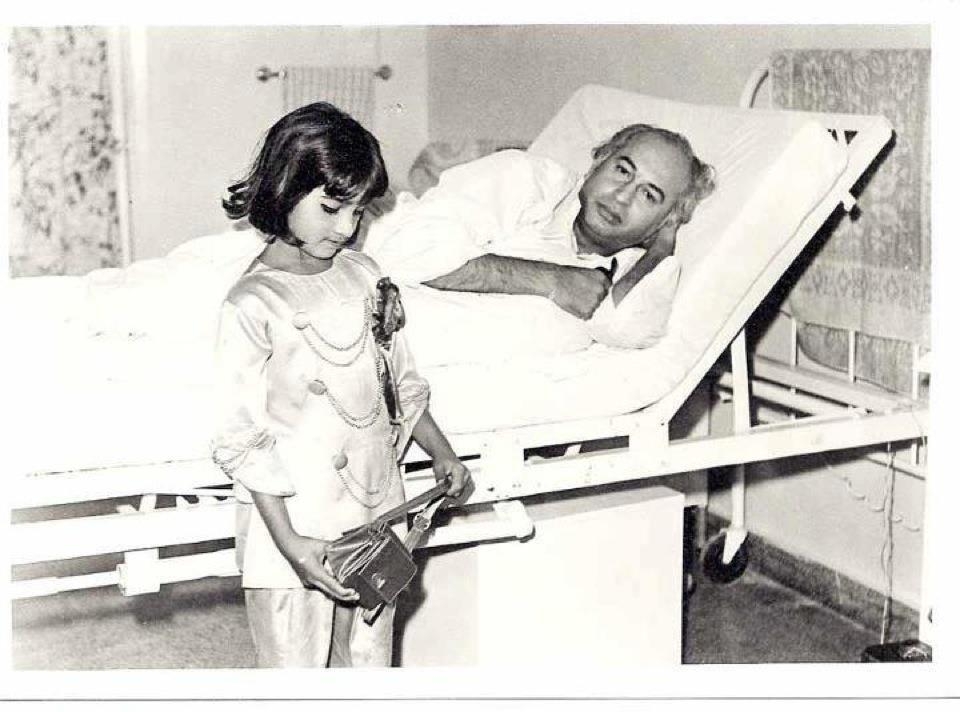 Bhutto attended Lady Jennings Nursery School and then the Convent of Jesus and Mary in Karachi. After two years of schooling at the Rawalpindi Presentation Convent, she was sent to the Jesus and Mary Convent at Murree. She passed her O-level examination at the age of 15. In April 1969, she was admitted to Harvard University's Radcliffe College. In June 1973, Benazir graduated from Harvard with a degree in political science where she was elected to Phi Beta Kappa. She attended Oxford University in the autumn of 1973 and graduated with a masters degree in Philosophy, Politics and Economics. She was elected President of the prestigious Oxford Union.

After completing university, she returned to Pakistan, but in the course of her father's imprisonment and execution, she was placed under house arrest. Having been allowed in 1984 to go back to the UK, she became leader in exile of the Pakistan Peoples Party (PPP), her father's party, but was unable to make her political presence felt in Pakistan until the death of General Muhammad Zia-ul-Haq.

On November 16, 1988, in the first open election in more than a decade, Benazir's PPP won the single largest bloc of seats in the National Assembly. Bhutto was sworn in as Prime Minister of a coalition government on December 2, becoming at age thirty five the youngest person and also the first woman to head the government of a Muslim-majority state in modern times.

After being dismissed by the then-president of Pakistan under charges of corruption, her party lost the elections held in October. She served as the leader of the opposition while Nawaz Sharif became PM for the next three years. In October 1993 elections were again held, which were won by the PPP coalition, returning Bhutto to office until 1996, when once again her government was dismissed on corruption charges.

She was charged and later cleared in a number of corruption cases in Pakistan. She has also been charged with laundering state-owned money in Swiss banks, in a case that remains before a Swiss court. Her husband, Asif Ali Zardari, spent eight years in prison although he was never convicted. He was kept in solitary confinement and claims to have been tortured. Human rights groups also claim that Zardari's rights have been violated. Former prime minister Nawaz Sharif has recently apologized for his involvement in the prolonged imprisonment of Zardari and the cases filed against Bhutto. Zardari was released in November 2004. It is alleged that they stole hundreds of millions of dollars by demanding 'commissions' on government contracts and other dealings. Over the past 10 years the couple have faced about 90 cases combined, none of which have been proven. Eight cases still remain, however Bhutto maintains that all the cases are politically motivated and says she is ready to face them. In 2005, Asif Zardari said in an interview on Pakistan Television that the military establishment had offered to release him and drop the charges on him if he agreed to quit politics and leave the country. However, Zardari refused to do so.

Recently an Auditor General of Pakistan (AGP) report has been made public that Benazir Bhutto was ousted from power in 1990 as a result of a witch hunt approved by then president Ghulam Ishaq Khan. The AGP report says that Khan, GIK for short, had approved a payment of Rs.28 million to marshal 'an army of legal advisors' to file 19 corruption cases against Benazir Bhutto and her husband Asif Ali Zardari in 1990-92, the English daily The News reported on the 25th of July 2008. The AGP report, challenging the legality of Khan's actions, makes out Benazir as a victim of political vendetta

It was during Bhutto's rule that the Taliban gained prominence in Afghanistan. Bhutto and the Taliban were openly opposed to each other when it came to social issues. According to the Taliban codes, as a woman she had no right to be in power. The Pakistan military, however, were insistent and Bhutto agreed to provide some support. Her government provided military and financial support for the Taliban, even as far as sending the Pakistani army into Afghanistan. Though she and her government have said that they only provided moral support and nothing more, which is now know to be a lie. The Taliban took power in Kabul in September 1996. New evidence suggess that Osama Ben Laden provided Nawaz Sharif with huge sums of money in order to 'buy support' and destabilise her government.

Despite these promises, Bhutto did not propose any legislation to improve welfare services for women. During her election campaigns, Bhutto promised to repeal controversial laws (such as Hudood and Zina ordinances) that curtail rights of women in Pakistan. However, during her two terms in power, her party did not fulfill these promises due to immense pressure from the opposition.

Her party did, however, initiate legislation during General Musharraf's regime to repeal the Zina ordinance. These efforts were defeated by the right-wing religious parties that dominated the legislatures at the time.

When audiences around the globe hear Benazir Bhutto’s dramatic story of democracy and deposal, they are awed by the tireless strength with which she struggles to bring freedom to the people of her country. As the former Prime Minister of Pakistan, Benazir Bhutto is a living icon of the battle for democracy, and stands with only a handful of female executive leaders who have shaped the global events of the last century.

First elected Prime Minister at the age of 35, Ms. Bhutto became the youngest Chief Executive Officer in the world and the first female Prime Minister in the Muslim world. After just 20 months in office, her government was unconstitutionally dismissed by a rival political party. Undeterred, she was reelected as Prime Minister in 1993.

During her terms of office, she was faced with an enormous challenge: how to effectively govern a poor, politically fractious, and ethnically diverse nation. Prime Minister Bhutto was praised for moving swiftly to restore civil liberties and political freedom, suspended under military rule. She launched a nationwide program of health and education reform. Although no longer Prime Minister, Benazir Bhutto is Chairperson of the Pakistan Peoples Party.

In her speeches, Prime Minister Bhutto speaks of being a “Daughter of Destiny” and shares her dramatic journey as the youngest ever popularly elected woman in the Muslim world. With knowledge born of her position in the global power structure, Prime Minister offers a window into the Muslim World and the epic political power struggles being played out in all corners of the world today.

Ms. Bhutto resided in Dubai and made frequent trips to the United States.

"Let us not, at this stage, out of impatience or fatigue, become indifferent." (Islamabad, Pakistan, December 4, 1988)

On November 16, 1988, citizens of Pakistan voted in their first open election in more than a decade, choosing as prime minister the populist candidate Benazir Bhutto, daughter of former Pakistani leader Zulfikar Ali Bhutto. She was the first woman leader of a Muslim country in modern history. After General Mohammed Zia-ul-Haq seized power in Pakistan in a military coup in 1977, Zulfikar Bhutto was tried and executed on the charge of having ordered an assassination in 1974. Benazir Bhutto endured frequent house arrests during the next seven years. In 1984, she fled to England, where she became head of her father's former party, the Pakistan People's Party (PPP). In 1988, President Zia died along with the American ambassador to Pakistan in a mysterious plane crash, leaving a power vacuum. Bhutto returned to Pakistan and launched a nationwide campaign for open elections. In elections on November 16, Bhutto's PPP won a majority in the National Assembly, and on December 1 Bhutto took office as prime minister of Pakistan. Here, she is heard expressing her opposition to a Pakistani nuclear weapons program and pledging continued support to the Afghan rebels fighting the Soviet occupation of Afghanistan. (Pakistan would explode its first nuclear bomb in 1998.) Bhutto's government fell in 1990, but from 1993 to 1996 she again served as Pakistani leader.