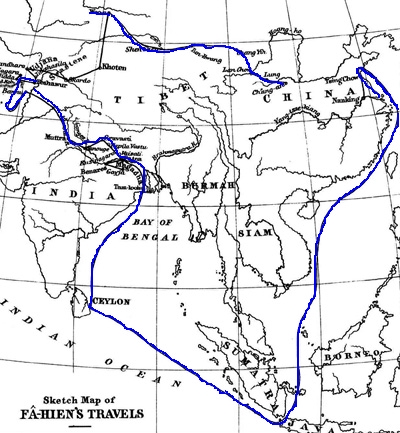 Travels of Hsuan-Tsang -- Buddhist Pilgrim of the Seventh Century

Editor's Note:This article is reproduced with the courtesy of silk-road.com the article talks about the 7th century Chinese pilgrim Hsuan Tsang and Fahein's travel records which they wrote during their travels from Chine to the Svatsu (Swat Valley). The word hereunder called India is actualy Indus valley that is today's Pakistan.

Hsuan-tsang or (Xuan Tsang) was born in AD 602. As a child he became already absorbed in the study of the Sacred Books of Chinese literature. While still a boy he was ordained as a Buddhist priest to the Temple of Heavenly Radiance in Hangchow, and soon there after was transferred to the Temple of Great Learning in Chang-an, a community of monks who devoted their lives to the translation of the Sacred Books from India. Listening to the variety of their interpretations young Hsuan-tsang conceived the bold plan to travel to India and bringing back more Sacred Buddhihs Books to China.

Hsuan-tsang traveled between AD 627-643. His detailed account provides the first reliable information about distant countries, terrain and customs. He traveled over land, along the Silk Road west toward India. However, the further west he traveled it became increasingly difficult to cross desert and mountain ranges. Of the Taklamaken desert he reports:

"As I approached China's extreme outpost at the edge of the Desert of Lop, I was caught by the Chinese army. Not having a travel permit, they wanted to send me to Tun-huang to stay at the monastery there. However, I answered 'If you insist on detaining me I will allow you to take my life, but I will not take a single step backwards in the direction of China'."

The officer himself a Buddhist, let him pass. In order to avoid the next outpost, he left the main foot-track and made a detour, which brought him to a place 'so wild that no vestige of life coult be found there. There is neither bird, nor four-legged beasts, neither water nor pasture'. At the point of final exhaustion his only companion, his horse, turned of in another direction, following its animal instinct, and led him to a place where there was water and pasture. His life was saved. Few days later he arrived at Turfan, where he stayed for some time. The king of Turfan enchanted by the monk's knowledge of the sacred Buddha books, refused to let him leave, only reluctantly relenting when Hsuan-tsang threatened a hunger strike. Thus, Hsuan-tsang had peaceable conquered to royal will. The king gave him letters of introduction the rulers of the oases along the way, thereby providing the assistance that made his pilgrimage successful.

Traveling through Samarkand (today's Tukestan) he describes that "...this great imperial city is surrounded by a wall, about seven miles in circumference, which governs a powerful state. This is a rich land, where the treasures of distant countries accumulate, where there are powerful horses and skilled artisans, and the climate is most pleasant."

Fifteen years later Hsuan-tsang reappeared on the northern side of the Great Mountains again, but this time with his face turned toward China. He was aware of the dangers between Khotan and Tun-huang---the Taklamakan desert. He comments: "...a desert of drifting sand without water of vegetation, burring hot and the hound of poisonous fiends and imps. There is no road, and travelers in coming and going have only to look for the deserted bones of man and beast as there guide". Hsuan-tsang crossed the dread waste of desert safely, reaching Tun-huang and deposited his precious manuscripts in the monastic library at the caves of the Thousand Buddhas.

(Return of Xuanzang with the Buddhist Scriptures, Silk scroll at Dunhuang) His detailed travel accounts from the Silk Roads provides reliable information about distant countries whose terrain and customs had been known, at that time, in only the sketchiest way. In later centuries he was immortalized as a saint and his journey popularized in fables and vernacular literature. However, for the historian and explorer he contributed a precise and colorful account of the many countries along the Silk Road.

Note: During the Sui (589-618) and the Tang (618-906) dynasties, the Chinese Buddhist schools were sophisticated, and the monasteries were numerous, rich and powerful.