Skardu is the main town of Baltistan along the wide bank of the river Indus. Skardu is the largest district of the Gilgit Baltistan and is this side if the region is called Baltistan. Baltistan is home to some of the highest peaks in the world, the Karakoram Range, Skardu is very popular with Mountaineering Expeditions. It is equally popular with high altitude trekkers, who treks to Baltoro Glacier, K2 Base Camp and Concordia.  Skardu by road, lies approximately 5 hours away from Gilgit and 12 hours drive from Besham.  A daily flight to and from Islamabad is also in operation. The flight is always subject to weather.

Skardu has a character of its own and has a very interesting scenery. The Indus becomes wide and still here. The town is surrounded by dry rugged mountains and sand dunes. 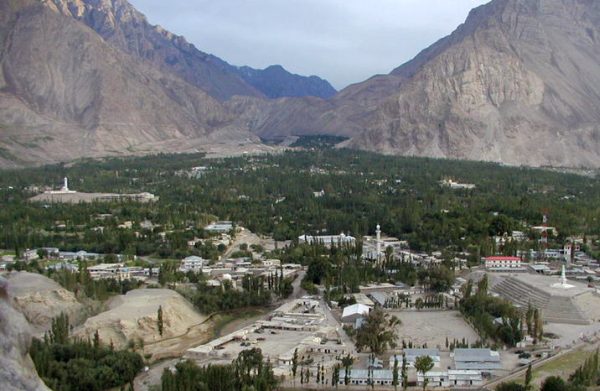 Skardu is famous for the many trekking and adventure spots around it. There are numerous treks starting from Skardu. The near by Satpara Lake and Shangri-la resort are very famous among the local travelers and is visited by people from all over the country during June & July school holidays.

The Skardu region has the four of the world's fourteen Eight-thousander peaks (8,000 m and above) this makes it a heaven for trekkers expeditions enthusiasts and mountain climbers. The main tourist season is from April to October

Askole and Hushe Valleys are the main gateways to the snow covered 8,000 m peaks including Mashabum, K2, the Gasherbrums, Broad Peak and the Trango Towers, and also to the huge glaciers of Baltoro, Biafo and Trango.

Adventure tours and jeep safaris to the Deosai Plains, the second highest in the world (at 4,100 m or 13,500 feet) after the Chang Tang in Tibet, either start from or end at Skardu. In local Balti language, Deosai is called Byarsa, meaning 'summer place'. With an area of approximately 3,000 square kilometres, the plains extend all the way to Ladakh and provide habitat for snow leopards, ibex, Tibetan brown bears and wild horses.

It is a multipurpose project, which will produce 13 Megawatts hydro generation, irrigate 15,000 acres (61 km2) of land and also provide 13 cusecis drinking water daily to Skardu city. Images of Satpara Lake

On 29 August 2009, the Gilgit-Baltistan Empowerment and Self-Governance Order 2009, was passed by the Pakistani cabinet and later signed by the President Asif Ali Zardari. It granted self-rule to the people of the former Northern Areas, now renamed "Gilgit-Baltistan," by creating, among other things, an elected legislative assembly.On the other hand there has been criticism and opposition to this move by Pakistan inside Pakistan, India, and the Gilgit-Baltistan region itself

Shigar: Shigar is a beautiful village just a few miles North of Skardu its picturesque village with beautiful terraced fields growing all sorts of crops. Shigar was once a small kingdom and the Shigar fort was once residential fort of the local ruler. Recently the Aga Khan shown interest in the fort which has now been renovated and is open for tourists. The Shigar fort has been renovated and converted into a hotel or residential fort.

Skardu to Hushe
This is a transfer by Jeep takes about 6 hours to Hushe  village which is starting point for trekking at different treks.

Skardu to Askole
Askole is an other village which takes trekkers to treks in different directions it is about 5 hours drive by Jeep.

Skardu to Khaplu
A 4 hours drive from Skardu by jeep or car the asphalt road is in good shape.

Skardu to Rama
Drive to Rama the point in Deosai planes there is a PTDC motel for you to stay here. It takes about 6 hours by jeep.

All above transfers are available any time for groups and individuals. For details please contact us.

Half Day Skardu
Visit the Puran Bazaar (Old Bazaar) Skardu , Polo Ground and then walk to the Dogra Fort built in Dgra times.

Half Day Sadpara Lake & Sadpara Buddha Tour
Drive to Sadpara Buddha visit the the Buddha carved in the mountain, later visit Sadpara lake and take your time to absorb the beauty of this beautiful lake.

Half Day Fishing In Sadpara Lake
Visit the lake and Relaex while fishing in the lake Fishing permit and Fishing gear provided.

Full Day Khaplu
Drive by Jeep to Khaplu and Visit the picturesque Bazaar of Khaplu and Khaplu fort later drive to a Photo point and return to Skardu in the evening.

Full Day Shigar Valley Tour
Drive to Shigar Valley via the scenic road Visit Shigar Fort resort and have Lunch there later drive back to Skardu.

Important places to see in Skardu

K2 Museum located near K2 Motel, displays pictures
Sand dunes On the other side of the Indus, impressive sand dunes are visible. Hire a taxi to get there. It is on the way to Shigar valley, but around 2 km away from the road. 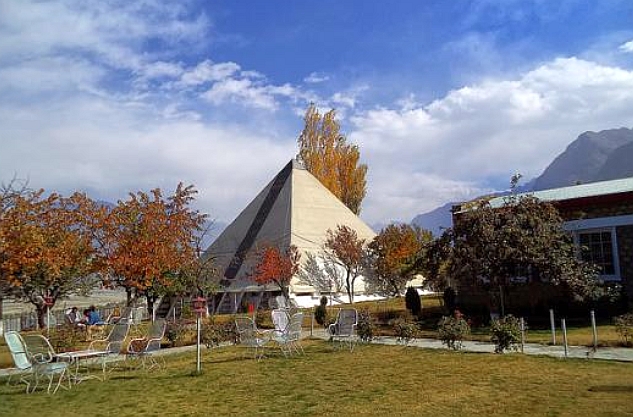 Kharpocho Fort: Skardu has an ancient Fort known as Kharpocho Fort (King of Forts) situated on a hill overlooking the town. It was constructed by Ali Sher Khan Anchan, who ruled over Baltistan till the end of the 16th century. The mighty Indus snaking along just a few yards beneath your feet among the silvery white sands is an awesome sight. 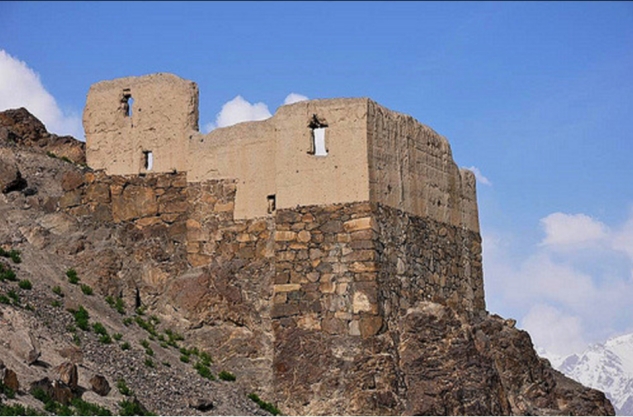 Satpara Lake About 8 km (5miles) north of Skardu and 20 minutes by jeep lays Sadpara Lake, surrounded by glacial mountains, which are mirrored in its crystal clear waters. The lake has a fairytale island in the middle, which can be reached by country boats that one can row. This lake also abounds in fish and is considered ideal for fishing

Shangrila Lake About 32 km (20 miles) from Skardu and 2 hours by jeep lies the shimmering peaceful deep Shangrila lake also called Kachura Lake, teeming with brown trout. During spring many exotic and colourful flowers adorn its banks, while peach, apricot and apple trees are laden with blossoms in April. Later in the summer one can taste the apples, which are a particularly delicious variety. Also see Shangrila resort.

Mountaineering, Trekking and Hiking: The area is ideal for mountaineering, trekking and hiking. Permission for mountaineering and trekking for restricted zone is issued by the Ministry of Tourism, Government of Pakistan, Pakistan Sports Complex, Kashmir Highway, Aabpara, Islamabad (Telephone: 92-51-9203509). Fishing permits are issued by the Fisheries Department at Gilgit and Skardu.
Fishing: at Satpara Lake (8km) and Kachura Lake (32km) from Skardu abound in trout. Fishing permits are issued by the Fisheries Department.
Flora & Fauna: Roses, lilies, pansies, willow, pine and fir trees are found in abundance. Apples, apricots, peaches, plums mulberry, walnuts and grapes are available from June to October and almonds from October to March.
Wildlife: Baltistan boasts of wildlife like Markhors, ibexes, snow leopards and birds, namely Chakors, partridges and ducks. Most of the animals and birds are protected but limited shooting is allowed. Hunting permits are issued by the local administration.
Icy Water Dipping is getting popular among a lot of tourists.
Biking
Walking excursions: A stroll around the eastern end of the Skardu rock will take you to the nearby village of 'Narsok', where you will find a large pure spring flowing from the base of the monolith. To reach Narsok, walk to the far end of the Skardu Polo field and pick up a trail that skirts the rock slopes beneath Zowar Singh's fortress. The mighty Indus snaking along just a few yards beneath your feet among the silvery white sands is an awesome sight. on the west bank of the Satpura Nala is a tall rock with a vertical, beige-colored northern face. Carved here circa A.D 900 is a lovely image of a meditating Maitreya Buddha framed by Bodhisattvas.