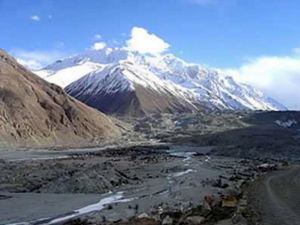 Chiporsun valley is a remote valley in the northern most region of Pakistan bordered with China & Afghanistan in the Wakhan coridor. It is only 80 Kilometers from Sost the border Pakistan post

Chiporsun has about eleven villages of Gojal district, which include Yerzirich, Raminji, Kirmin, Kill, Reshit, sher-i-subz, Ispanj, shetmarj(kimpir diyor) & Zood Khon, Reshit is the oldest village of chipursan, and known the central village of chipursan valley, the story of chipursan begins from Reshit when the three Persons From Gulmit migrate to this valley.

The people speak the Wakhi Language believed to be an original and one of the earliest & pure language. Most of the people are Ismailis in Chapursan

The Chapursan Valley has seen very few foreign visitors in past as well as now as the tourism in Pakistan is at zero level. However Chaupersan is a very safe and peaceful valley. To reach Chauparsan once can either fly to Islamabad and drive to Hunza and later drive to Sost and than into Chaupursan or one can also fly into Kashgar or Urumqi in China and drive into Pakistan and drive to Chapursan from Sost.

Chaporsun offers splendid trekking opportunities and the chance to experience the renowned Wakhi hospitality and culture.

Just beyond the northern limit of Afiyatabad the winding link road to Chapursan intersects with the KKH. After travelling through crumbling mountains and sliding scree slopes that make the trip adventurous at any time but exceedingly dangerous during rain, the simple but colourful Panja Shah Ziarat, a shrine to a Sufi saint, is reached after about 40 minutes. Soon after, the first village of the valley, Yazrich is signalled by a rare splash of green vegetation and low stone-and-mud dwellings typical of the valley. Fifteen minutes further is the large village of Raminj, mostly hidden above the road. 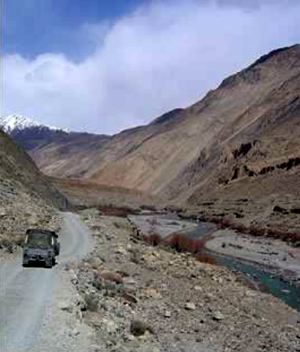 The next three villages – Aminabad, Rahimabad and Nurabad – are clustered where the valley broadens into a bowl and are collectively known as Kirmin. Ten minutes on, massive slopes of grey scree are separated from the green wheat terraces and irrigation canals of Kil, a village that spans the river and is linked by a tenuous suspension bridge. The next villages along the valley road are Reshit and nearby Sher-e-Sabz, each with a guesthouse, then Ispanj and Shuthmarg, before the final village of Zood Khun, at about 3500m.

At Zood Khun there is a small guest house called Pamir Serai run by the redoubtable Alam Jan Dario, horseman, musician and ambassador of Wakhi Tajik culture. As Alam Jan Dario runs cultural and adventurous treks on foot or horseback into the valleys and over the passes of his spectacular homeland.

Beyond Zood Khun is the mystical and holy Baba Ghundi Ziarat, a shrine to a Sufi saint said to have miraculous powers, and a popular pilgrimage site. The shrine is surrounded by meadows that host herds of sheep in summer and, sporadically from June to September, Kyrgyz traders from Afghanistan who traditionally cross the Irshad Pass with horses, yaks and sheep to trade with the Chapursan villagers

Commonly, The valley of "Chipurson" is referred to as Chapursan. This is the name you will find on most maps. However, Chipurson is a more correct spelling of the name, taking into account the name's Persian roots. The key cultural sites and historical places to visit are Bobo Ghundi ziyrat (shrine), Kumpir Diyore, and Reshit Fort Reshit Polo ground is viewpoint, zareen Yeshkok and Panja Shoh Shrine on the way to Chipurson . The Reshit Coal mine is also an important tourist point, which is 5 km from Reshit village. Besides traditional Buzkashi and Polo are played in the valley and local festivals are organized annually. 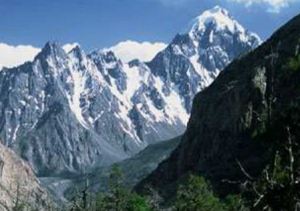 Kuchkhamak is a traditional festival where the flocks from the pastures return to the village in late autumn. It is quite fascinating event for tourists and a joy for local youth, women and children. there are more many whaki (Xik)culture which are calibrated in chipursan valley,, there are many seasonal tournament organized every year, such are polo, cricket, football, volleyball etc 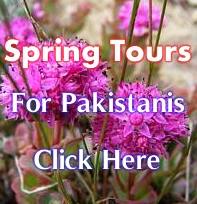 Tours for Tourists from Thailand