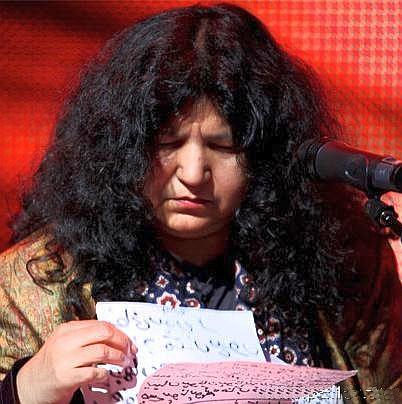 The most famous singer of Sufi poets, especially Sindhi Kafis, is undoubtedly Abida Parveen. Born in 1957 in Larkana, Sindh, she received her initial musical training from her father, Ustad Ghulam Haider. Later, she studied under Ustad Salamat Ali Khan of the Sham Chorassi gharana of classical music.

Abida Parveen sings in Sindhi, Urdu, Seraiki, Punjabi and Persian, today she is considered the finest Sufi vocalists of the modern era. 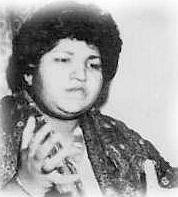 When in 1970 she performed in public for the first time at the Urs of Hazrat Shah Latif, a new era began in the world of music. But she says, "It is the kalam [works] of the Sufi saints, not my voice, that involves the listeners in my music."

Abida Parveen started her professional career from Radio Pakistan, Hyderabad, in 1973. Her first hit was the Sindhi song “Tuhinje zulfan jay band kamand widha”.She is considered one of the most prominent contemporary exponents of the great ghazal and kafi musical styles from the Indian subcontinent. Rooted in the intense encounter between sensitivity and spirituality that is Sufism. She never ceases to sing her fiery love for the Divine. The earliest memories of her childhood are all linked to her passion for music and her desire to sing. Born in 1954 in Larkana, Sindh into a family tat maintains close associations with the shrines of Sufi saints.

Hyderabad Radio officially first introduced her in 1977. She is today the most popular and well-known folk and ghazal singer of Pakistan who breathed a new life into ghazal and semi-classical music. She holds an audience of thousands spellbound. Her appearance is a complete reverse of many other stage performers. She begins each number as solemnly as the previous one as the evening progresses, sinking deeper and deeper into her kafi’s and Sufiana kalam of the mystic poets. She is a woman of very few words and asks to be judged only by her music. This folk phenomenon, called Abida Parveen, is deeply religious and profoundly humble.

Abida Parveen first sang for television in 1979. Her popularity reached new heights after she sang “Gharooli”," a Punjabi kafi, for Karachi Television's "Awaaz-o-Andaaz" in 1980. Until then, Sufi songs were seldom presented on the national hookup, but Abida's renditions changed that.

Abida Parveen is the finest singer of ghazal, geet and Sindhi, Seraiki and Punjabi Kafees. “While Khayal and Thumri became a part of her childhood training, her effective rendering of folk and traditional music with great sophistication and without losing the basic characteristics of the regional music of Sindh has made her a versatile singer.”

Her fame traveled through Pakistan and across the seas, and she toured USA, UK, and France in 1985 and 1988. Her 1988 performance in Chicago was recorded by the Hazrat Amir Khusro Society of Art and Culture, which issued a long-play record of her renderings, and her 1989 performance in London's Wembly Conference Hall was recorded by the British Broadcasting Corporation and aired for an hour. She has represented Pakistan in India and has performed for huge audiences in Pakistan and the Middle East. Abida Parveen sings semi-classical and classical music, Ghazals and Geets, and Kafis in Sindhi, Punjabi, and Seraiki with equal ease.

Her classical training enables her to render folk and traditional music with great sophistication without losing its regional flavour. Her command of the kafis of Sufi poets Shah Latif, Sachal Sarmast, Bulley Shah, Khawaja Farid, and Shah Hussain is unmatched. As a ghazal singer, Abida prefers the poetry of Nasir Kazmi, Mustafa Zaidi, Ibne Insha, and Faiz Ahmed Faiz.

Abida Parveen is the recipient of many awards: the Shah Abdul Latif Award (twice,) the Sindh Graduate Association Award, the Sachal Sarmast Award, the Pakistan Television Award, the Qalandar Lal Shahbaz Award, and of course the President's Pride of Performance.

Although she is a famous figure in the world of music, Abida Parveen is simple, soft-spoken, and courteous woman. In 1975 she married Sheikh Ghulam Hussain of Radio Pakistan, Hyderabad. She is the mother of two daughters and a son.