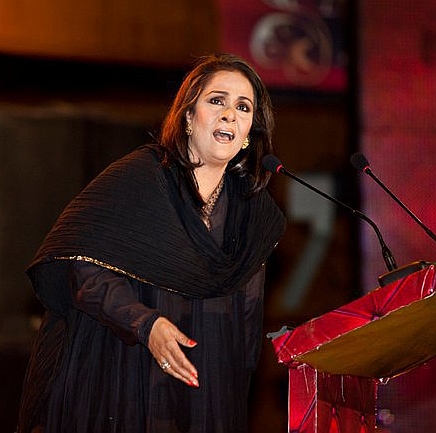 Tina Sani, a well known geet and ghazal singer, was born in Dhaka. She studied in Kabul before moving to Karachi, where she earned a diploma in design and began working for an advertising agency in 1977. She was involved in all the creative aspects of advertising business, including listening to and evaluating the music that is an integral part of advertising. One day a friend who had heard her sing casually at home asked her to record a jingle. This led to her career as a singer.

Encouraged by her obvious talent, her parents engaged a music teacher to give her formal training at home. Her career was launched in 1987, when she accepted an offer to sing for Karachi Television's "Tarang". This was her breakthrough; its title song"Khari neem key neechey" became a household song. Then she began to take her singing very seriously. Teaching sessions and a daily practice schedule became a routine.

Tina had taught briefly at the International School in Karachi, so when Karachi TV offered her "Rang Tarang," she accepted immediately. The show, a series for children, was an instant success, and Tina contributed to the script, the music, the concepts, and of course the singing. Around this time Tina met for some time composer Arshad Mahmud, who has been her friend and guide. He began to work with Tina on her interpretation and rendering of the poetry of Faiz Ahmad Faiz. By singing Faiz, Tina feels that she is taking his message to the people, who have been wonderfully receptive to her efforts.