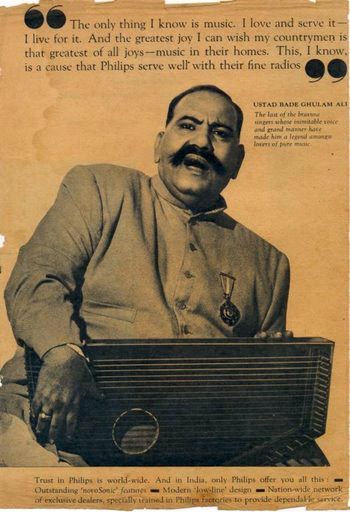 Ustad Bade Ghulam Ali Khan, who established himself as a master vocalist and exponent of the Patiala gharana, began his career as a sarangi player. He was a man of unparalleled and inimitable virtuosity.

Born in Kasur, he was initiated into instrumental music by his father, Ustad Ali Bakhsh Khan. He played the sarangi for fifteen years before he started singing. During his youth, he spent some time with another competent musician, his uncle, Ustad Kaley Khan. The family moved to Lahore, where young Ghulam Ali lived with his elders in Haveli Mian. He had already established his melodic credentials and made his presence felt in the musical world of the Punjab. Like other musicians of that period, Bade Ghulam Ali Khan also took part in theatrical activities. His younger brothers, Barkat Ali Khan and Mubarak Ali Khan, also earned fame.

Bade Ghulam Ali Khan was at ease with almost all forms of vocal music; khayal, tarana, thumri, dadra, and kafi. His close associates remember that he also sang Punjabi, Kashmiri, Sindhi, Purabi, Bengali, and even Nepali folk songs with much gusto. After independence he left Bombay and settled down in Karachi. Unfortunately, he was alienated by the "supercilious attitude" of the head of Karachi radio station at a social gathering in Lahore. He returned to India in 1950, where he was warmly welcomed and eventually honored with the highest award given to an individual for artistic excellence.

Unquestionably one of the brightest stars in the galaxy of contemporary practitioners of classical singing, Bade Ghulam Ali Khan was a superb exponent of khayal singing as it was refined by the Patiala gharana of Punjabi musicians, which came to dominate the entire subcontinental melodic scene. His recitals of classical formulations, and the variety of effects which his unique and plangent voice created, held audiences spellbound. During his 30-year career as a vocalist, his fame attained heights reached by few others. Music lovers still remember his masterly approach to the structure and unfolding of a raga.

Bade Ghulam Ali Khan's music was as original as it was brilliant. His own classical compositions (asthais and antaras) inspired a whole generation of vocalists with their profound melodic content.

Khan was born in Kasur, then in the Punjab province in British India; now in Pakistan, His father was a famous singer, Ali Baksh Khan, in a West Punjabi family of musical heritage.

At the age of seven, he learned sarangi and vocal from his paternal uncle Kale Khan, who was also a singer and composer of repute, and after his death he picked up a few compositions from his father who had re-married by this time.[3] This tenure lasted for almost three years. It was at this juncture that he improvised the musical instrument "Kanoon" to the present "Swaramandal" which became his trademark. When he was about 21 years old, he moved to Benaras where he accompanied a courtesan named Zarabai on the sarangi and started to perform in public.