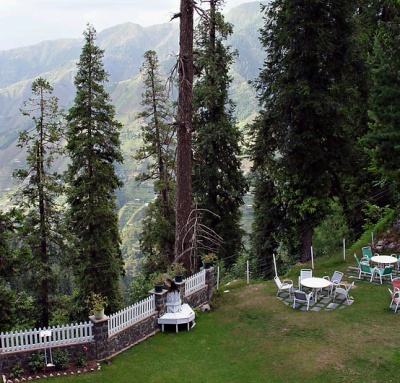 Nathia Gali is a hill resort town or hill station in Pakistan Just about 100 Kilometers from Islamabad Nathiagali is a popular destination as a day Excursion as well as a weekend holiday. Nathiagali is a part of the Galiaath which are termed such due to several hill-stations in that area ending with the word "gali".  Nathiagali is known for its scenic beauty, hiking tracks and pleasant weather, which is much cooler than the rest of the Galiaath due to it being higher altitude.

You can reach Nathia Gali from Islamabad (2 & Half Hours) or Murree (45 Minutes) by road. There are also Daewoo vans leaving daily fro Murree and from there one can hire a taxi to reach Nathiagali.

Nathiagali is also accessible from Abbottabad.

The descent on the Nathia Gali - Abbottabad road leads to the city of Abbottabad right under the Murree hills. Abbottabad, a popular summer resort in the midst of spacious valleys, is surrounded by green hills and is a pretty large city and is located at a distance of 116 km from Rawalpindi and 217 km from Peshawar if you follow the MAIN road. It can get pretty hot in summers and pretty cold in winters but the temperature range stays bearable. It may feel hot in the sun but its cool in the shade. Surrounded by high hills, Abbottabad is named after its first British Commissioner Sir James Abbott. It still has a very British air. The Cantonment area of Abbottabad is still very British. The European bungalows, the club, the churches and the cemeteries are still there. Lots of greenery in Abbottabad, beautiful trees and nice gardens.

There is a main road which is the centre of activity (I think its called the Mall). The good hotels are SpringField, Sarban and others. Abbottabad is famous for its golf courses. Take a visit. Also see Shimla Hill View Point, Illayasi Mosque with a natural water spring and there is a pool nearby which I think carries crocodiles. The place has beautiful gardens like; Jinnah Garden, Ladies Garden etc maintained by the local Cantonment Board. The splendid stretch of turf promises plenty of room for polo, football, hockey and golf. At the back of the station towards the west is the Brigade Center, which is an ideal place ideal for walks and picnic. Nice place to stay If you're coming from Lahore to visit the North.

The Nathiagali region serves as home to all kinds of wildlife; various species of birds, insects, butterflies and animals. Unlike the crows of the southern cities of Pakistan, you will find ravens in areas like Nathiagali. Visitors are advised to sun their bedding on arrival to get rid of bed-bugs, and to keep repellants and pesticides for insects as these have a tendency to show up a lot, especially in old homes, and in the monsoon season.

Horses are a common sight during summer months and are offered to children and adults alike for rides at rates that are often negotiable. Monkeys are aplenty, previously known to be a little shy, they have reportedly become more aggressive in recent years, some say this due to increased abuse suffered at the hands of tourists, who often tease these monkeys or try to steal them. Monkeys often come up to guesthouses and hotels in search of snacks and can be quite noisy and playful.

The World Wildlife Federation has an office in the Galiaath, in recent years, this organization assisted in the breeding of a certain type of leopard in the Black Forest right by Dungagali and Nathiagali, this area was thought to be a perfect habitat for such creatures, but according to local reports they frequently come out of the forest to steal cattle of local villagers. One such cat had to be shot. Packs of pie-dogs which were previously considered to be a night-time menace can no longer be seen anywhere in the Galiaath, it is thought that most have been killed and consumed by the newly bred leopards. In the summer of 2006, a large number of women were found dead in the deep valleys of Galiath with wounds showing that they were killed, soon, a large leopard was caught which was believed to be the culprit of all cases, he was kept in captivity but was eventually shot as a result of his aggression, his body has been stuffed and kept in the Dhunga Gali Wildlife Museum, the museum owners named him the Ghost of Galiath. These leopards are rarely spotted. However, a pet dog or animal is very likely to be grabbed by the cats at night, and if any such pets are brought to Nathiagali they must be kept indoors to avoid this.

During British rule Nathia Gali, then part of Abbottabad tehsil of Hazara District, served as the summer head-quarters of the Chief Commissioner. The town along with Dunga Gali constituted a notified area under the Punjab Municipalities Act, 1891. The income in 1903-4 was Rs. 3,000, chiefly derived from a house tax, whilst expenditure was Rs. 1,900

Scenery
The natural scenery is highly magnificent. It is actually famous for it scenic beauty, the lush green meadows, deep forests of oak, cedar and pine, fog in July/August present a glory. In winter snowfall makes scene more attractive and beautiful. The church in Nathi Gali is a remnant from the period of British Government, it is totally made of wood. It is situated at the edge of the mountain from which there is a beautiful sight. Kashmir can be seen right behind this church, and is a wonderful scene.

Nathi Gali has a mini bazzar. The nearest place to Nathi Gali is Kala Bagh. Mukshpuri and Miranjani are two nearby high peaks.both peaks are higly beaytiful and present natural beauty. 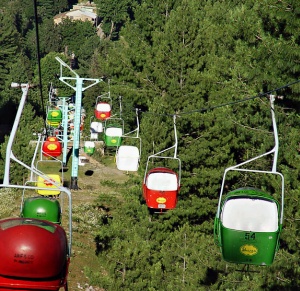 Thandiani means cold in the local language. Its around about 1 hour and 30 minutes on a good decent road. Its rises steeply at some places. It is 2700 meters above sea level on a small plateau surrounded by pine forests. This beautiful spot can easily be approached from Abbottabad, which is 24 km away. It is totally unspoiled and has the loveliest of views of all the hill stations of Pakistan. The scenery here is breathtaking and superb. It is pretty high. Just a few kilometres into the road and you start gaining height quickly. One place on the road offers a stunning view of Abbottabad city. Thandiani is not located in the Galliat Range but some other range. Beautiful trees on the way and also a few small caves which are probably home for the wildlife.

Thandiani was discovered by the British but was later neglected and was only rediscovered as a hill station recently so it is completely unspoiled. There are few shops at Thandiani and only one basic guesthouse (no big expectations!). It only gets cold about 2 km before Thandiani. There is also a Pakistan Television Booster at the top and a Pak Air-Force Radar (No Photographs). But the beauty of this area is its views. Stunning views of all the areas around this region. Views of the Galliat Range, Hazara Region, Swat Forests, Chitral region and that of Abbottabad itself. Heard the dawn was beautiful but didn't stay at the guesthouse though. Also heard it gets real cold at night even in summers almost below 0 C. Lots of greenery and some beautiful rocks on the ground. There is also a road at the top which seems to go straight into the sky when you first enter Thandiani but it gives wonderful views. Must visit place!

Miran Jani is the highest point in the Galliat Range at about 2867 m. It is a very scenic trek to Miran Jani Top which offers wonderful views of the pine forests and hills surrounding the region. The trail to Miran Jani is just behind the Governor's House. You can book horses from Nathia Gali if you dont want to go there by foot.

Dungagali is a picturesque small resort situated on the slopes of the Mukshpuri hill (2376 m.). It commands a charming view of a series of wooded spurs projecting towards the river Jhelum on the western side. From Dungagali one can climb the 2813 m peak of Mukhshpuri, which is the highest point in the range. Natural springs abound on the slopes. It is 30 km from Murree. There are nice hotels available too.