Kargah Buddha locally known as Yʂhani is a Buddha carved in a cliff just outside the city of Gilgit, Pakistan. The Buddha is carved image of a large standing Buddha with his right hand raised forward i.e. in the posture of A Bhaya (No fear or protection). The archeological sites dates back to 6th to 8th century AD

According to the archeologists the carving was completed in the 7th century. It was discovered in 1938–39, following the innovation of supposed Gilgit manuscripts in 1931.

During the 8th century the Gilgit city was inhabited by Buddhist and was in controll of China, however later a legent was associated with the Buddha. According to the legend, the figure is actually a man-eating giantess or witch (yakhshini or ya-chaani or yacheni) who terrorized the local residents and was ultimately pinned to the cliff by a pir (holy man) as punishment 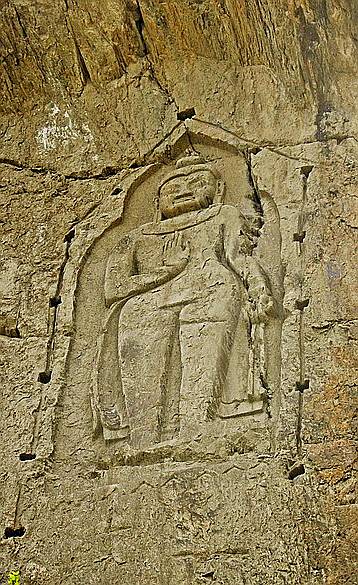 Kargah Buddha is located at the junction of two rivulets or ravines, the Kargah and Shukogah, about 6 miles (9.7 km) west of the town of Gilgit.[4][5] Nearby locales include Barmas village, Rakaposhi mountain, and Napur.

From the 3rd century to the 11th century, Gilgit was a Buddhist center. Nearby, about 400 metres (1,300 ft) upstream, a Buddhist monastery and three stupas containing Sanskrit manuscripts were excavated in 1931. During this time period, multiple nations vowed for control of the region, including the Tibet, Kashmir, and the Arabs. By the 11th century, Gilgit had grown into the autonomous kingdom of Dardistan before accepting Islam.