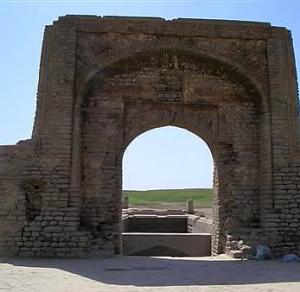 Mirpur is said to be founded in 1052 AH (After Hijri) (around 1642 AD) by a Gakhar chief named Miran Shah Ghazi. However the area now comprising Mirpur district has been historically associated with Pothohar region. Around end of 18th century, Gakhar power in Pothohar had declined. Mirpur had become part of Chibb ruled state of Khari Khariyali with capital at Mangla Fort. With the rise of Sikh power in Punjab, Maharaja Ranjit Singh established his supremacy and set his eyes on the chibh states of Bhimber and Khari Khariyali. In 1810, a force was sent against Raja Sultan Khan of Bhimber and was met with fierce resistance. However, in 1812 another Sikh army under prince Kharak Singh defeated Sultan Khan and the Bhimber state was annexed as Jagir on Kharak Singh. Around the same time, Ranjit Singh acquired Gujrat and invaded Khari Khariyali ruled by Raja Umar Khan. Raja Umar Khan made peace with Ranjit Singh. But before a settlement could be made, he died and Ranjit Singh confiscated the state and Mirpur became part of Ranjit Singh's territories.

In 1816, Ranjit Singh annexed Jammu state and in 1820 awarded Jammu to his commander Gulab Singh who hailed from Jammu and was under the service of Ranjit Singh for the past eight years. Between 1831-39 Ranjit Singh bestowed on Gulab Singh the royalty of the salt mines in northern Punjab, and the northern Punjab towns including Bhera, Jhelum, Rohtas, Mirpur and Gujrat. Gulab Singh kept on expanding his kingdom and in 1840 Baltistan was made subject to Jammu and Gilgit fell to a Sikh force from Kashmir in 1842. The state of Kashmir was annexed by Ranjit Singh in 1819. However the rebellion in Hazara in the beginning of 1846, compelled the country to be transferred to Raja Gulab Singh of Jammu as well

As an aftermath of the First Anglo-Sikh War and the Treaty of Lahore, The Treaty of Amritsar was signed between the British Government and Raja Gulab Singh of Jammu on March 16, 1846. This treaty transferred him all the hill states between Ravi and Indus. The transfer included Kashmir Valley, Hazara and the southern hill states (including former Khari Khariyali). Thus sealing the fate of Mirpur with the new state of Jammu and Kashmir.

With the arrival of British rule however, the thriving river trade was decimated due to the construction of railway lines from Bombay and Karachi into the interior of the Punjab. Moving goods by rail was both cheaper and quicker, and hundreds of Mirpuri boatmen found themselves out of a job.

At the same time long-distance ocean trade was shifting from sail to steam. There was a huge demand for men who were prepared to work in the hot, dirty and dangerous stokeholds of the new coal-fired steamers. European seamen avoided such jobs whenever they possibly could. They preferred to work on deck. But in the 1870s Mirpuri ex-river boatmen were desperately searching for a new source of income. Although unfamiliar with stoking coal-fired boilers, they were prepared to learn and quickly gained a virtual monopoly of jobs as engine-room stokers on new steamships sailing out of Karachi and Bombay, a position they retained until coal-fired ships were finally phased out of service at the end of the second world war.

After world war two a new set of opportunities opened up. Britain's economy was just setting off on what proved to be a long post-war boom, and there was an acute short of labour in the foundries of the Midlands, and the textile mills of Yorkshire and Lancashire. Now it was the turn of ex-seamen to become industrial workers in Britain. So when the Mangla lake was filled up in 1966, depriving large numbers of Mirpuri farmers of their land, an alternative was readily available: to move overseas to join those of their kinsfolk who had established themselves in Britain.

As a result, Mirpur is one of the principal sources of migration from Pakistan to Europe, and especially to Britain, so much so that close to half a million migrants from this area now live in the United Kingdom. Although it is widely believed that the principal reason for this outflow was the construction of the Mangla Dam, this is only partially true. Whilst the construction of the dam undoubtedly reinforced the scale of the outflow, since the waters of the lake swamped most of the best land in the District, emigration from this region began long beforehand.

Map of Mirpur CityMirpur city is situated at 459 meters above sea-level and is linked with the main Peshawar-Lahore Grand Trunk road at Dina Tehsil. It is the headquarters of Mirpur District, which comprises three sub-divisions, Mirpur, Chaksawari & Dadyal[4]. The building of the new city in late sixties paved the way for New Mirpur situated on the banks of Mangla lake. In fact the remains of the old city (old Mirpur) are underneath the waters of the Mangla Lake, during colder months the water level decreases such that you can see the tops of minarets from the first mosques, and also the remnants of a Sikh gurdwara as well as a Hindu mandir possibly dedicated to the "mangla mata" (mangla mother goddess).This is a glimpse of pre-independence times when there were many faiths co-existing in Kashmir as a whole, but however after partition the Hindus, Buddhists and Sikhs fled to India. Mirpur was well planned and the buildings are mostly of modern design, in addition there is significant inward investment from expatriates now living in the United Kingdom, Europe, North America, & the Middle East. The city has a number of hotels, restaurants, shopping malls and other urban facilities.

Industry
As Mirpur adjoins the industrial cities of Pakistan, the Government of Azad Jammu & Kashmir has successfully endeavoured to develop it as an industrial place and promote private investment for establishing, Foam, Polypropylene, Synthetic yarn, Motorbikes, Textile, vegetable ghee, logging and sawmills, soap, cosmetics, marble, ready-made garments, matches, rosin, turpentine and scooter industrial units in the area. However, much of the infrastructure still needs further development in order to compete on a national level. As part of the relief/compensation package in the wake of Mangla Dam Raising Project, a New City is being developed along the southeastern outskirts of Mirpur. Civil works at huge scale are going on around the whole district, by the Pakistani & Chinese contractors for raising the dam. Four towns in the district have been planned besides the new city, to resettle the population affected by the project.

Auto rickshaw
Auto Rickshaws are very popular mode of transport for short routes within the city. Many of the new rickshaws in the city use Compressed natural gas (CNG) instead of the petrol engines as CNG is environmentally clean and cheaper compared petrol.

Air
The nearest airport is the Islamabad International Airport, which is approx 80 Miles (130Km) by road from Mirpur city.

Shopping
Known as the shopping capital of Azad Kashmir, Mirpur has a large and diverse shopping area, centred around Chowk Shaheeda & Mian Mohammed Road. There are many stores, plazas, shopping malls & markets in these thoroughfares, selling everything from hand made pottery to international brands. The under construction Nosha Shopping Centre will be one of the largest shopping centres of the city when completed.

Demographics
According to the 1998 census Mirpur had a population of approximately 370,000 making it by far the largest city in Azad Kashmir. Mirpuris account for approx 80% of the population followed by Punjabis 15%, Pathans & Afghan refugees 5% The majority of the population in the Mirpur district are Muslim, however prior to partition the district had a high number of Hindus & Sikhs.

Culture
Mirpur (to the west and south) borders the Punjab province of Pakistan and the ethnicity, language and culture of both Punjab & the Mirpur district are virtually the same. The region has historically been a part of Greater Punjab. Pahari & Pothohari are the main languages spoken in Mirpur, whereas Punjabi is spoken in areas bordering Bhimber and Gujrat districts.

Pahari Mushahira
Pahari Mushahira is a literary event in which poets from all over Azad Kashmir present their poems to general audience. Pahari Mushahira are celebrated regularly in Mirpur city as part of the campaign of Alami Pahari Adabi Sangat for the preservation and rehabilitation of the Pahari language and the Culture of Jammu and Kashmir