Osama Bin Laden was killed by the American forces on 2nd of May 2011 at 8 AM. Osama's death brought a temprary joy for the American people but has caused many conspiracy theories and also some adverse reaction. The bomb blasts in Pakistan's other cites have increased and US citizens are ever more vulnerable for attacks on them around the world.

Monday 2nd of May 3AM

3 helicopters fly from Afghanistan basis of the US marine

Two Black Hawk helicopters land at at the compound of which one develops technical problems. A team of 25 Seals breaches at least three walls to reach the main building.

According to BBC one person fires on the commandos. Three men and a woman are killed by the US Navy Seals. There were no US marines casualties

US commandos find Osama Bin Laden in a room on 2nd floor with his wife. They fired at the wife and shot her in the leg. Bin Laden, who was unarmed, is shot twice and killed.

The US forces took Computer hard drives and other evidences from the compound, along with Bin Laden's body. The US team departs after destroying the damaged aircraft

All this happened in 40 minutes after which the US forces left, taking Bin Laden's body and a hoard of computer data devices and other information containing intelligence about al-Qaeda and Bin Laden's activities, however leaving behind the other dead, among whom were a woman and one of Bin Laden's sons. They also left a group of three women and 13 children - two girls and 11 boys - bound with plastic ties.

President Obama and his security team watched the operation in real time from the White House The US team was forced to abandon one of its helicopters after it was damaged in a hard landing at the compound site. It was mostly destroyed in an explosion set by the US forces as they departed.

Publicly, the US authorities have given few details about the raid and some of these have changed since the news of Bin Laden's death was officially announced.

Some images of the Osama's Compound 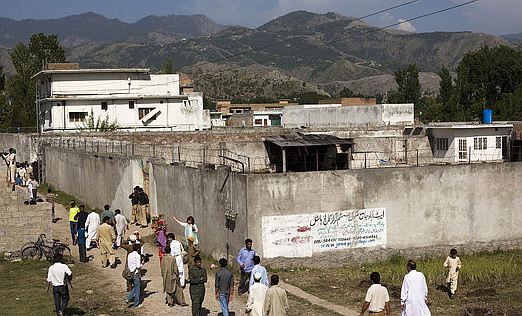 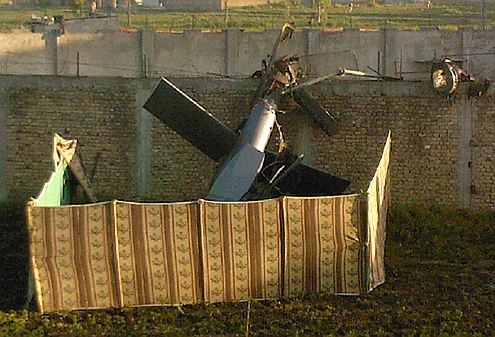 The helicopter that had technical problem it was destoyed by US forces before they left.

2nd Floor where Osama's bedroom was

Carpet and cell phone of Osama